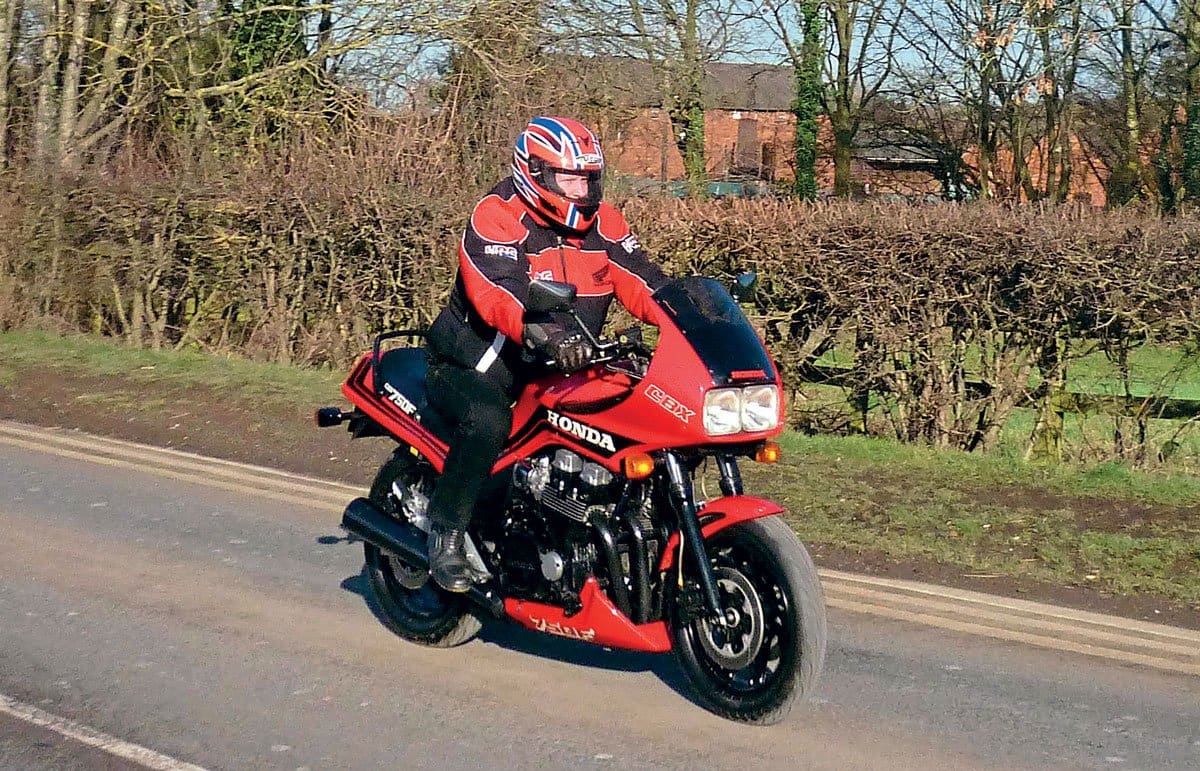 Nestling under the ‘classic’ radar, Honda’s CBX 750 is an Eighties throwback that gives many modern luxuries.

Imagine this: Back in 1984 a young man named Marvin Nicholls stared through the window of a motorcycle shop, with his face pressed against the glass. Eagerly, he lusted after a gleaming, red, black and chrome Honda CBX 750 that was rotating slowly on a turntable. Could he afford one? Of course not – they were the latest offering from Japan.

Fast forward to our day and mention the letters ‘CBX’ in casual conversation, most bikers will immediately think of the 1000cc magnificent inline six. Indeed, the CBX 750 appears to be one of the forgotten bikes from the rich heritage of the 1980s; but not for Marvin – for he patiently waited nearly 20 years until he had the money – and the opportunity, and bought two. Are they that good?

The Honda CBX 750 has typical 1980s styling, being similar to its close competitors the Kawasaki GPZ, the Suzuki GSX-R and the Yamaha FZ. The separate fuel tank, seat and lights of the previous decade had been rejected for the angular flowing design that made it look as though the bike was going fast, even at a standstill.

Today, there are many good reasons for considering this machine because it is a pretty decent all-round bike, and if you’re nostalgic for 1980s designs (dash included) then it is a nice blend of the old and the new. Like the Honda 650 Nighthawk of the very same decade, it has similar engine design features that included double overhead cam and self adjusting tappets.

These were not only quiet but never needed maintenance – well, hardly. It came with a half fairing and tinted screen. Compared to other sportsters, the Honda’s fairing may look a little inadequate, but it works surprisingly well, so that the rider sits in a comfortable pocket right up to and over the magic ton. 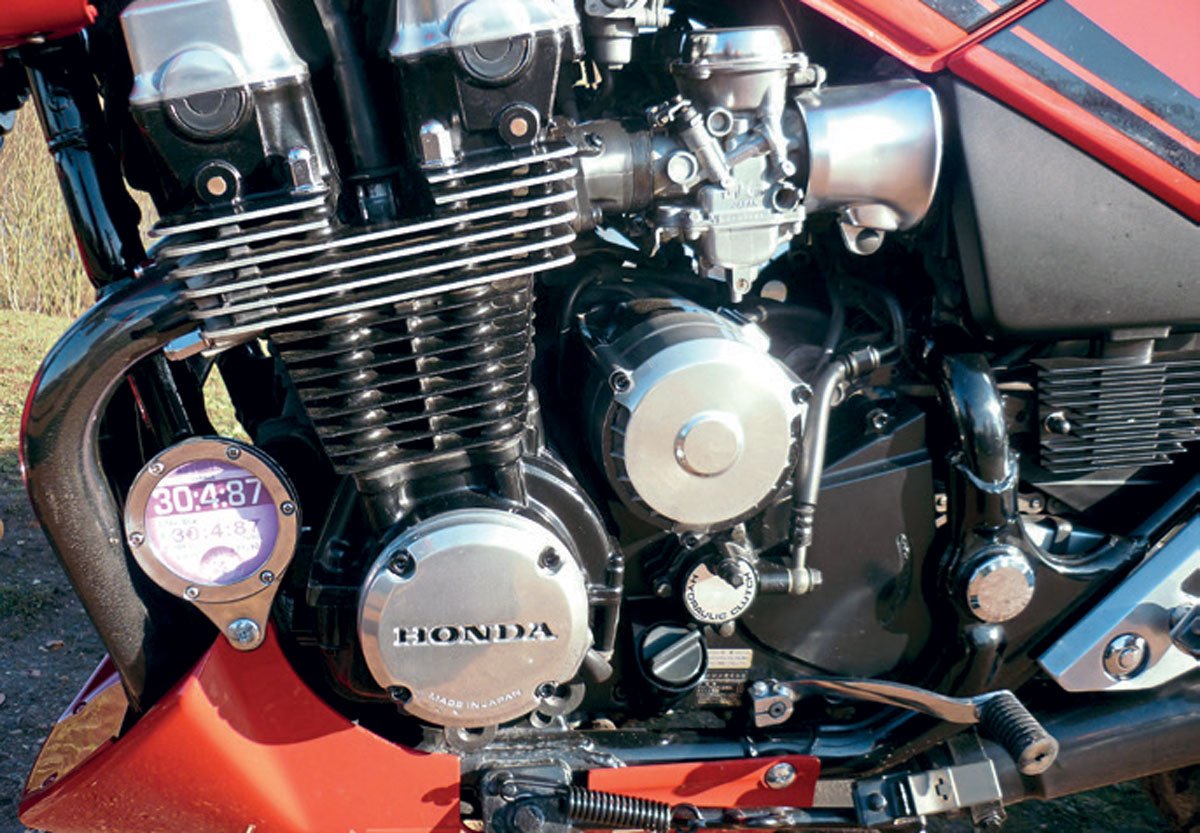 The CBX 750 was designed to appeal to the conservative rider who wanted the classic inline four, whereas the Honda VFR, a complex V-four was a totally different beast. The CBX however, has come a long way developmentally from its earlier CB750 ancestor.

The new lump was not much like its ground-breaking predecessor; the engineers had taken steps to trim its measurements in every dimension. Width was reduced at the bottom of the motor by moving the high output alternator from the end of the crankshaft to behind the cylinders on top of the gearbox next to the starter motor. Here it’s driven by a chain from the centre of the crankshaft.

Some commentators criticise the CBX for maybe having too many internal chains (three in total), but our friend Marvin has seen his bike do over 30,000 miles without any chain mishaps whatsoever. I suppose it all comes down to good maintenance in the end.

Height was lost by the novel method of reducing the depth of the sump. So where did Honda stick all the oil? They copied BSA and put some of it in the frame. Yes, the two forward down tubes take up a slice of the lubricant and along with the oil cooler at the base of the fairing, help to keep everything at a reasonable temperature.

Incidentally the other three manufacturers all chose to go with either water or oil cooling, so the Honda is one of the last bikes to have traditional air-cooling fins and carburettors – Keihins in this case. The oil filter is kept in its usual handy location at the front of the engine. Finally, the length of the engine was trimmed by cutting out any primary drive chain so that the clutch is driven directly from a gear wheel on the crank.

It was at the top end though where Honda did a revamp. The camshafts are hollow for lightness, and as mentioned earlier, the oil-filled hydraulic tappets are amazingly efficient. No it wasn’t a revolutionary system, because Harley had used them for years before – but Honda made them better.

As you may know, oil is non compressible, but get air into the system and they stop working. Therefore the lubrication system has to have a means of supplying air free oil to the tappets. Oil is pumped up from the crankshaft main bearing gallery to a separator chamber mounted inside the crankcase. 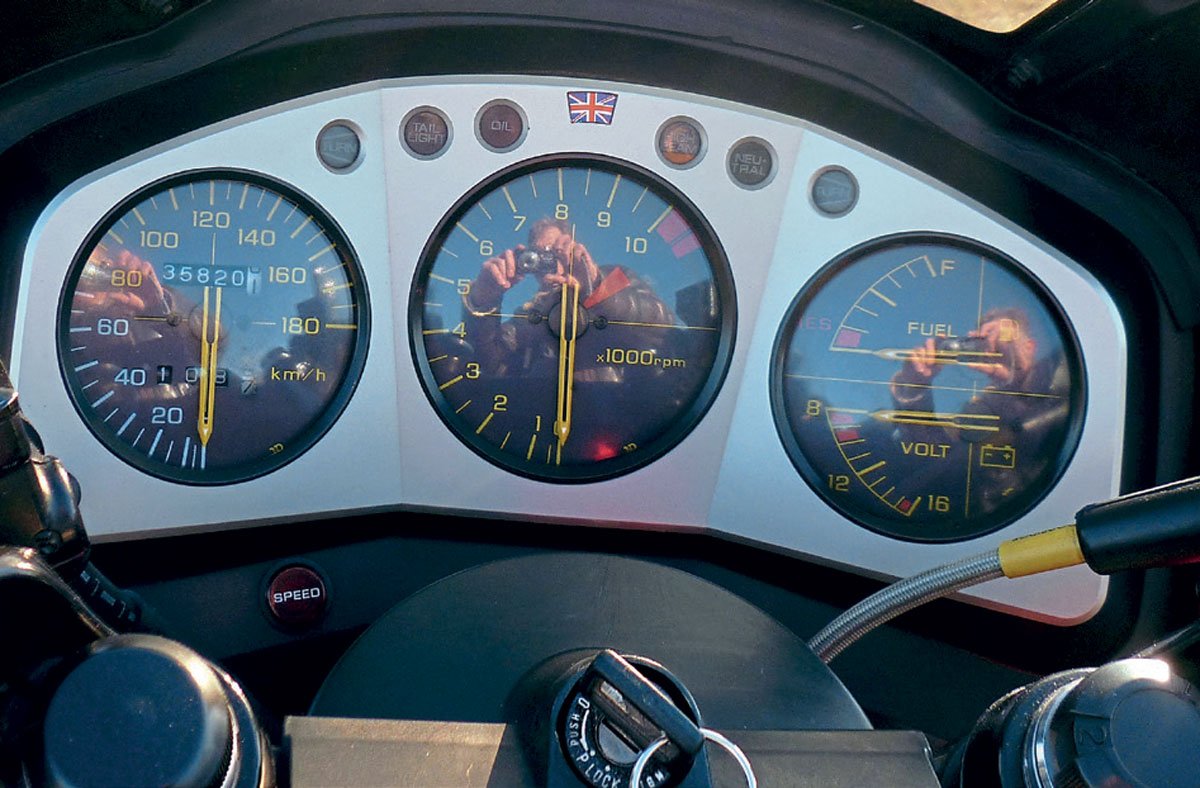 Any air bubbles rise to the top of the chamber. The bubbly oil – if we can call it that is then pumped to the alternator bearings – they don’t mind, while air free oil is drawn from the bottom of the chamber and pumped to the camshaft bearings. It then drains down into defoaming chambers mounted above the tappets – clever eh?

All the early scribes and testers of the CBX were suitably impressed by the handling and general comfort of the 750. Comfortable cornering is aided by the smaller and narrower 16in front wheel and tyre. The front forks are of a beefy 39mm tubing with an anti dive function at the bottom of the sliders called TRAC – which actually works.

There are four settings to choose from on the TRAC unit – which admittedly does not noticeably alter the feel, but there is also a three-position rebound switch at the top of the forks, which for your average British roads is perfectly adequate.

The frame, with its large diameter spine tube is nicely rigid – not like the early days of Japanese bikes – so that any high speed weave is eliminated and you can do the ton with confidence – not that you want to go that fast of course. In the 1980s, Honda started to use computers to design their frames.

Different load and ride conditions could be applied to a virtual frame simulation; this did away with the need to keep making and testing expensive prototypes. The same design process also added a bit of vertical height to the main chassis so as to allow better access to the engine. Now the head, block and pistons can all be removed once the fuel tank and coil are off.

The rear Pro Link suspension is similar to its larger six-cylinder brother, being air operated with a preload of 0-57 psi, filled and adjusted through a Schrader valve that sits on a handy extension hose behind the right-hand side panel. When Marvin purchased his bike back in 2000 he wasn’t totally happy with the suspension. 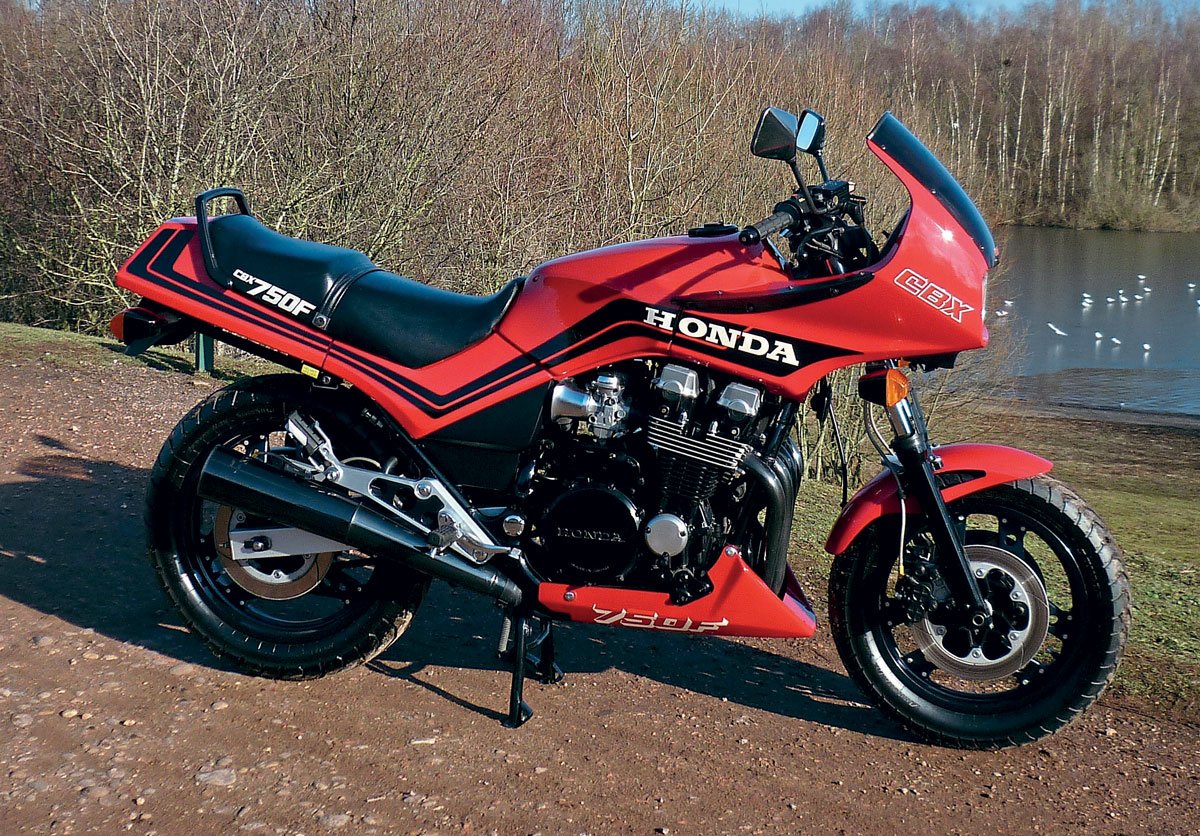 Being a hefty lad, he thought the unit a tad too spongy, leaving the seat too close to the wheel. So, he removed the unit and extended it by just over an inch by welding a piece in. This has lifted the back of the bike to his own preferred setting and he assures me that the handling has not been affected.

Build quality and details for 1980s Hondas are generally very good, though the car style clock layout may be a Marmite factor. When Marvin bought his first CBX it was an import with kilometres on the faces – he has just bought a set of clocks with mph on, so is about to convert to UK increments.

Spares for these machines – like other bikes of over 40 years vintage are a bit thin on the ground, so that’s why he made the wise decision to buy a cheaper second bike so as to cannibalise parts.

Gear selection on the CBX is as good as it gets – which comes as no real surprise for Honda addicts. The six ratios are well appointed and close for smooth acceleration, and the motor pulls well from 3000rpm onward. It’s not known for its low down torque, but it does make up for that when you go past the 6000 mark. It’s an engine that likes to rev. The hydraulic clutch is sweet to operate, while the brakes, with their twin discs (solid ones showing their age) up front are simply excellent, pushing the tyres to their maximum.

I was impressed by the excellent condition of Marvin’s bike. This machine had obviously been kept out of the very worst weather and well maintained. I was somewhat surprised at the chrome dummy bellmouths at the rear of the outside carburettors. They are obviously a nod in the retro direction, but after a bit of indecision I rather think I like them.

A standard air filter sits under the rider’s seat. The twin headlights are a UK style but single headlights were fitted to overseas machines. Nevertheless the CBX is typically blessed with Honda’s good electrical and lighting equipment and the fuel gauge can, and does work well on this bike, no matter what others may say. 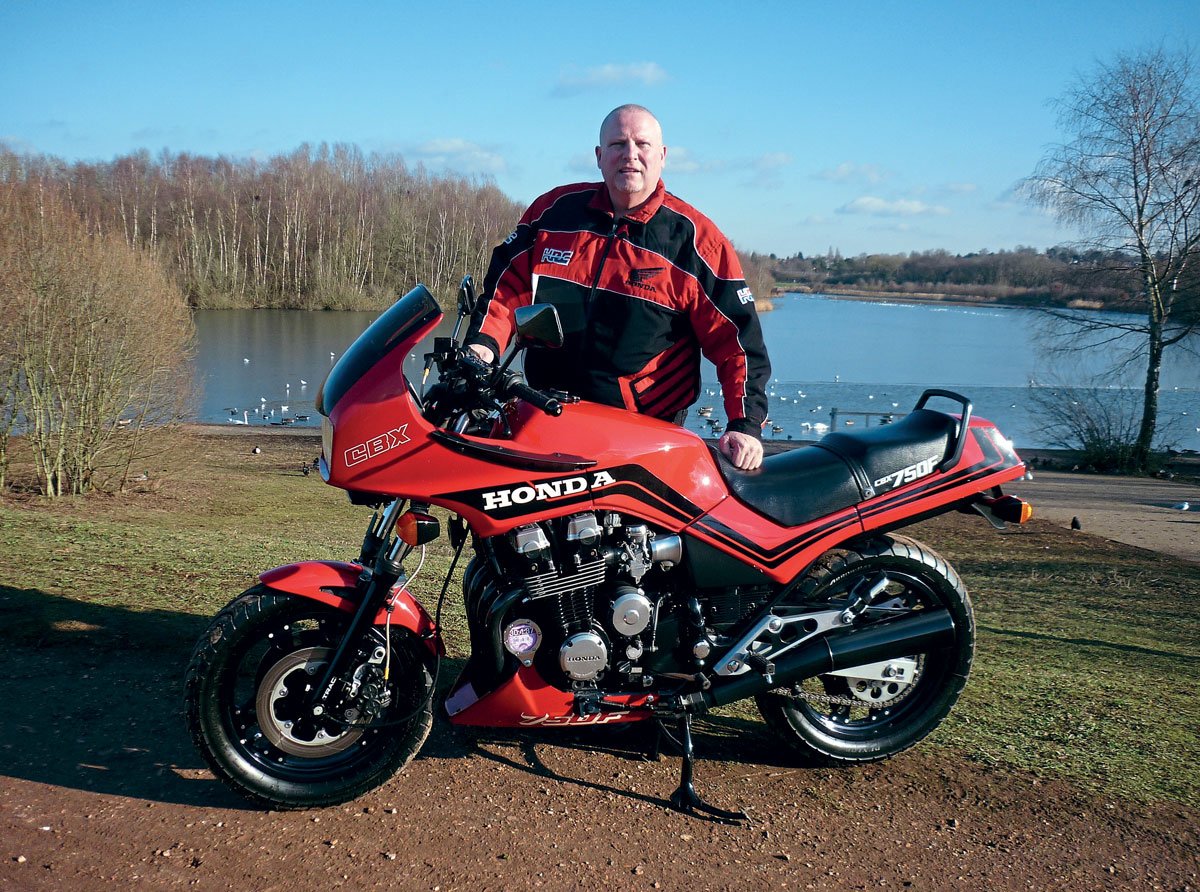 If comfort is high on your list for a classic Japanese, then the CBX will not disappoint. The capacious seat is padded like a firm mattress, and the riding position is well thought out for long journeys.

The handlebars are a clip-on design but are mounted high on the fork tops and angled backwards. On similar styled bikes such as the ubiquitous cafe racer, this would be a recipe for trapped thumbs at full lock, but the Honda’s bars provide plenty of room between tank and bars.

Being an ‘Old School’ engine, and I mean in this case having carburettors, it is a thirsty beast with no pretensions of being energy conscious. Ride it hard and you won’t get more than the low 30s to the gallon. Take it for a nice lazy Sunday run and you will add another seven or eight miles to the tally, but not much more. Fortunately the fuel tank is ample at 22 litres so the bike still has a decent range between fill ups.

The clutch is a two-way item, designed to cope with any backload caused by either poor downshifts or sharp deceleration in low gear, like a modern slipper clutch. Half the plates then slip and prevent the rear wheel from hopping as the suspension attempts to extend itself to the limit of its travel. This is achieved by a two-piece clutch centre, the outer part of which is equipped with a sprag clutch that allows the outer portion to rotate in either direction.

Under normal operation – you and I that is – the sprag clutch is engaged, allowing drive to be transmitted in the usual way. Put a backload through it and the sprag clutch disengages – allowing the plates to slip. Good eh?

So in conclusion, the Honda CBX 750 goes well and handles well – once set up for the rider – and it’s comfortable to boot. 1980s styling is not everyone’s cup of tea, but if it is, and you even like the dash – it has its own charm – then you may find this uncommon bike right up your street.

If you’re looking to buy one, then look at the condition and mileage and listen for any tell-tale rattly chains that may be on their way out, unless of course you plan to do the whole engine strip down thing and get it like new – nothing wrong with that. The good news is that the bike is well down the general must-have list and therefore you may well indeed grab a bargain, or two, like our friend Marvin.