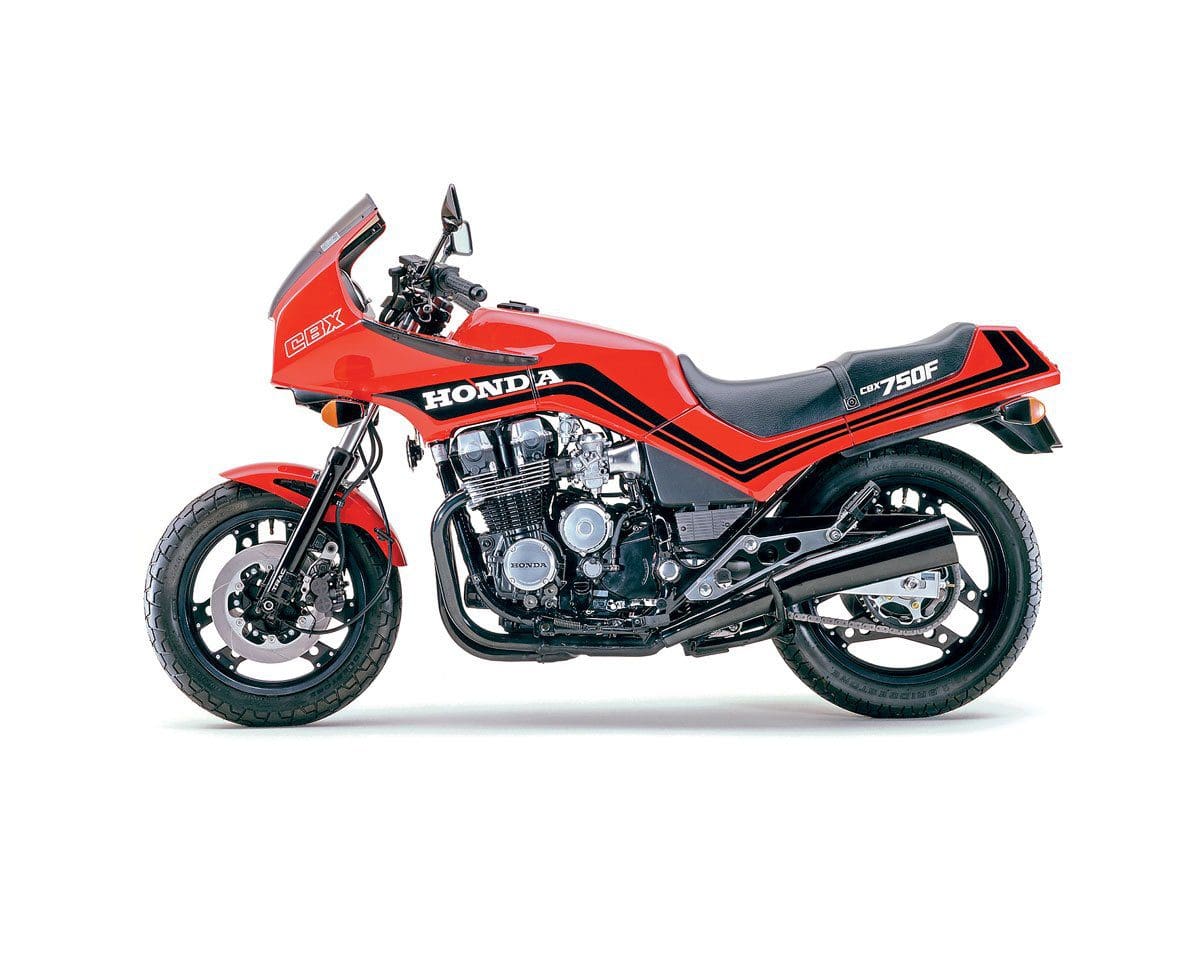 Despite having only a four-year lifespan, the monoshock, double overhead cam Honda CBX750 was an important bike in Soichiro’s line-up during the 1980s, if only to take some pressure off several of Honda’s previous products…

While the launch of the single overhead cam CB750 back in 1969 had catapulted Honda truly into the limelight, as other Nipponese factories joined the fight, then development from the Hamamatsu factory was vital to compete with the new machines from Kawasaki, Suzuki and Yamaha. But when the twin cam CB750 came to the market 10 years after that first iconic Cee Bee, it didn’t receive quite the same rapturous welcome, particularly when it showed several reliability issues. Aside from having to allay the fears that potential buyers had thanks to the issues that plagued the first of Honda’s DOHC inline fours, the new CBX also had to fit into a fast-moving marketplace that was seeing three-quarter litre bikes become sportier by the month. With the Kawasaki GPz750 Unitrak and Suzuki GSX-R750 setting the pace, the CBX had to be sportier than the V-four 750 that Honda had launched a year earlier in 1983. That V-engine was based around the liquid-cooled powerplant that had arrived in the custom-styled Sabre and Magna in 1982 (albeit with six-speed transmission and shaft drive, while the sportier VF had chain final drive and just five gears). The first of the V-fours had also shown some reliability problems, becoming known as the ‘chocolate camshaft models’, despite that the engine soon became one of Honda’s most famous and reliable powerplants by the time it reached the epic VFR750F in 1986.

As the first of the V-fours weren’t exactly flying out of the showrooms, the 747cc inline four-cylinder CBX750 was put into the European line-up for 1984, while also being sold in the Australian and South African markets. The new bike’s engine format owed itself to the previous CBX650 (virtually identical to the 650cc Nighthawk sold in America) but utilised a stronger crank and crankcases, had larger valves (of 22.5mm and 25mm), which were hydraulically actuated, and a bore and stroke of 67mm and 53mm. Sucking through a bank of 34mm Keihin CV carbs, this resulted in a healthy 91bhp produced at 9500rpm – quite feisty in comparison to its competitors, with the Kawasaki claiming just 80bhp.

The styling was rather fresh for Honda, with the half fairing flowing neatly through the tank, into the side panels and tail unit, all of which was clearly designed by the pen of one man, rather than it being a bike with a fairing just bunged on the front to make it sportier…

And Honda hadn’t just gone for a restyled bike with a modified powerplant, as this was clearly designed from the ground up, and not just in terms of the bodywork, but also with the chassis and rolling gear.

The frame might have been a conventional steel tube cradle frame, but it had the relatively new ‘Pro-Link’ monoshock suspension that had appeared on the six-cylinder CBX1000 in 1981. Up front, a 16in wheel was fitted into conventional 38mm forks that had trendy-for-the-time hydraulic anti-dive units fitted.

While the ‘TRAC’ anti-dive might not have aided handling in any way, the 16in wheel certainly didn’t harm matters, which wasn’t the case with other bikes of the time that were fitted with the smaller front. And it certainly aided in giving swifter direction changes than bikes with an 18in front wheel, such as the GPz750. The forks were also equipped with adjustable rebound damping, with a choice of three positions available – quite something for the time.

Not that any of this aided the Honda’s image, as there was still the ‘chocolate camshaft’ stigma, allied to an increasing image of Honda’s products being built for ‘old men’, something that a work colleague of mine at British Coal struggled with. ‘Jiff the People Folder’ (while his passion for Oriental martial arts explains part of the nickname, why we spoke Geoff’s name in an Afrikaans accent is something that only those present in the pre-PC workplace might be able to understand) was consistently getting ribbed for his “old man’s touring bike that wasn’t reliable enough to go touring…”

The reality was that the CBX750 – having the factory denomination as an RC17 – was actually a reliable bike, providing that an eye was kept on the camchain tensioner, while unnerving engine noises could also be put down to the chain that drives the alternator and starter motor. This, too, had the potential of eating the spring-loaded tensioner/chain guide, with serious consequences to the engine’s health. But don’t be thinking that these issues mean that the CBX is an unreliable machine – remember that it is, after all, a Honda. And with the fuel tank containing a smidgen short of five gallons, fuel consumption that could be coaxed to 40mpg and a riding position significantly more comfortable than competitors’ offerings, cross-Continental touring is most certainly a possibility with a CBX.

It’s also worth knowing that the CBX750 was used by a number of police forces around the globe, and while the ones sent to Gibraltar may not have covered many miles, those in Ireland, Turkey, Hong Kong, Malaysia and Singapore probably experienced greater use. In fact, the police version (designed as the CBX750P, amazingly) remained in production for six years more than the standard version, until 1994, with at least two in Gibraltar still being used in 2016! Rumour also has it that, when asked by the Irish police for some more bikes, Honda restarted production in 1997!

Available in red, black, or silver colour schemes, it originally cost about £2800 when new in 1984, although poor sales led Honda UK to cut about £300 off the RRP to sell stocks faster in 1985 before the launch of the VFR750 in 1986. The fully faired CBX750F2 came in 1986, also known as the CBX750 Bol D’Or, which was equipped with a full fairing. While it still had the twin square headlights, they were ensconced within a single unit so they looked like one light – and nowhere near as attractive or individual as the original. As an aside, bikes built for some markets only had a single headlight, and they look nowhere near as nice… 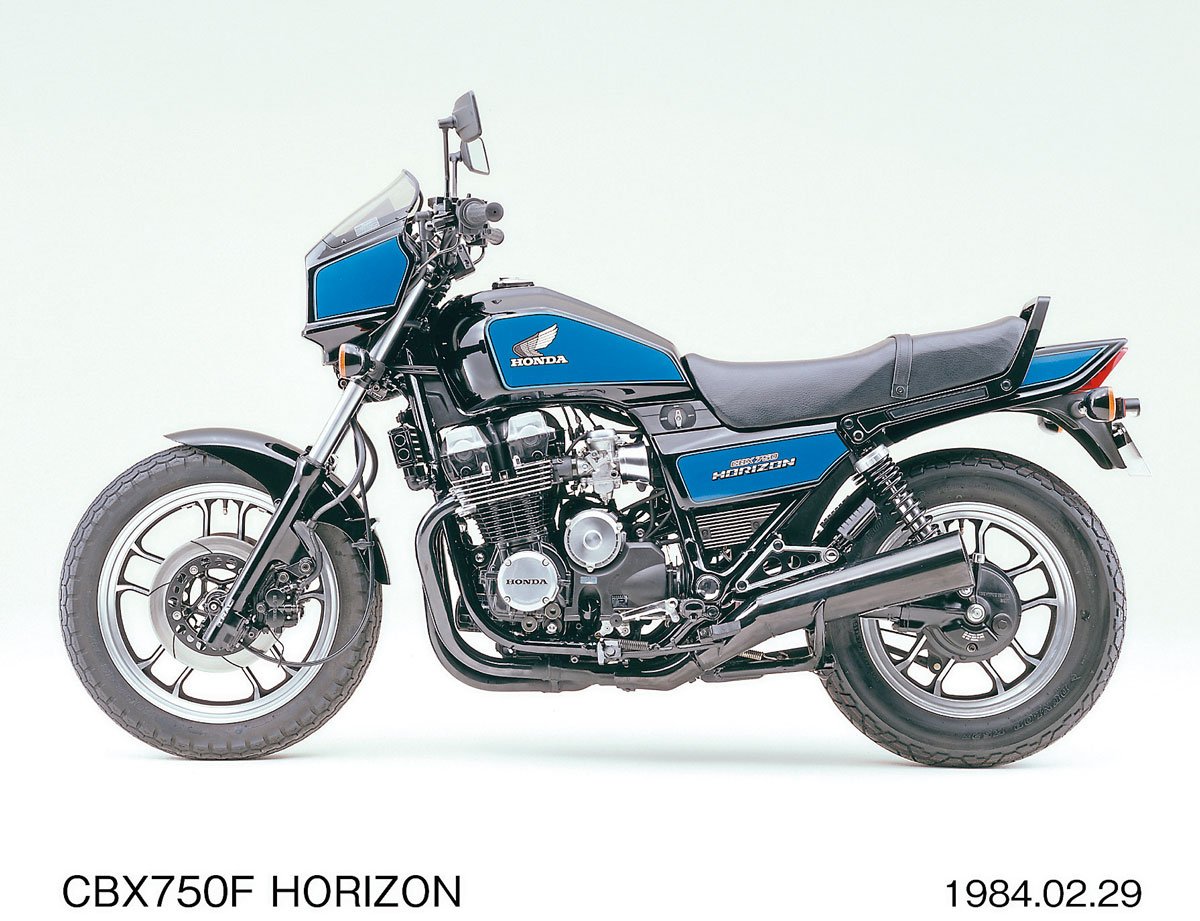 While you can consider the CBX to be the last of Honda’s air-cooled 750s – as when it was taken off the product listing in 1988 it was replaced by the water-cooled V-four VFR – the engine actually made a return in the retro-styled ‘Seven Fifty’, also known as the RC42, produced between 1992 and 2008. It’s essentially the same engine, albeit with a few tweaks such as solid engine mounts (rather than the rubber mounts used in the CBX) and a revised oil system that limits the amount of oil being sent to the cylinder head, with the side effect of increasing the oil supply to the crank. The CBX has two oil supply systems, with the single oil pump using two chambers – one feeds the gearbox and the oil cooling system, the other running through the filter and feeding the crank and camshaft. The gallery that feeds the crank has a hole to feed oil to the cams directly opposite the second crank journal oil hole, which results in an issue if the bike is either run low on oil or held at high revolutions for a long period of time, in that the oil feed to the crank is reduced while the feed to the head remains strong. Which is why it is possible to find engines that have the strange issue of destroyed cranks with perfectly fine cylinder heads and cams!

The similarities between the CBX and the retro engine are rather useful when it comes to spare parts, as quite a lot are interchangeable, even if they are different, if you get my drift. The perfect example is the gearbox: while the CBX is a six-speeder, the Seven Fifty has a five-speed transmission, yet they are interchangeable within the crankcases. The clutches are, however, completely different thanks to a variation in size of output shaft, but this can be swapped to suit. Also, gearshift drums are slightly different, although the shift forks are identical. 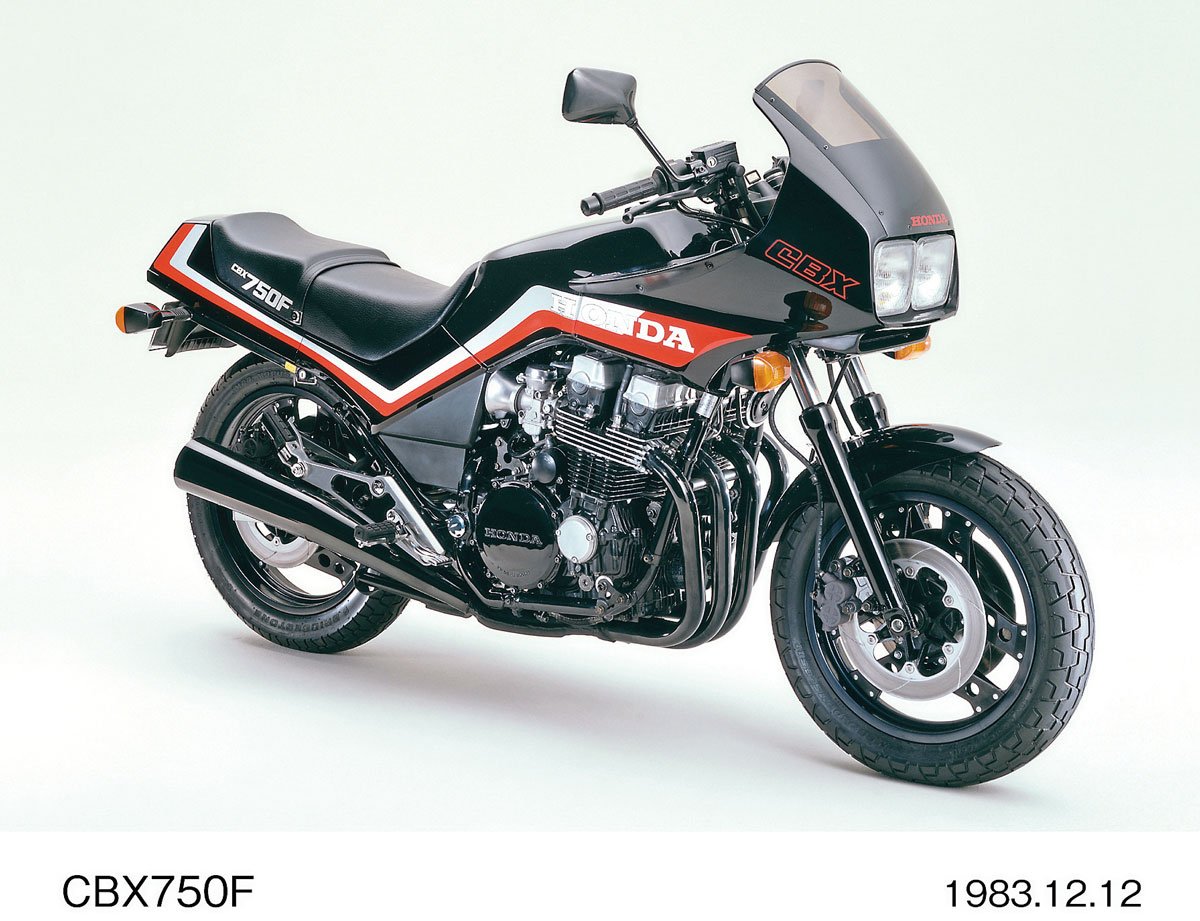 The CBX’s alternator drive chain was a weak spot, which explains the wider chain used in the Seven Fifty, although aside from the sprocket sizes, the crank and alternator are also the same. Later alternator chain tensioner can be used, as can the uprated oil pump. Pistons, rods and barrels are compatible, although the later engine’s head has smaller valves, less radical cams and, naturally, less power. Incidentally, the head, block and pistons can be removed with the engine in situ in the frame, once the fuel tank and coils have been removed.

While the CBX750 has never had a cult following, with the increase in interest of sports-oriented 750cc bikes from the 1980s and prices of models such as the early GSX-R750 reaching impressive levels, the value of a decent CBX is only going to head upwards. 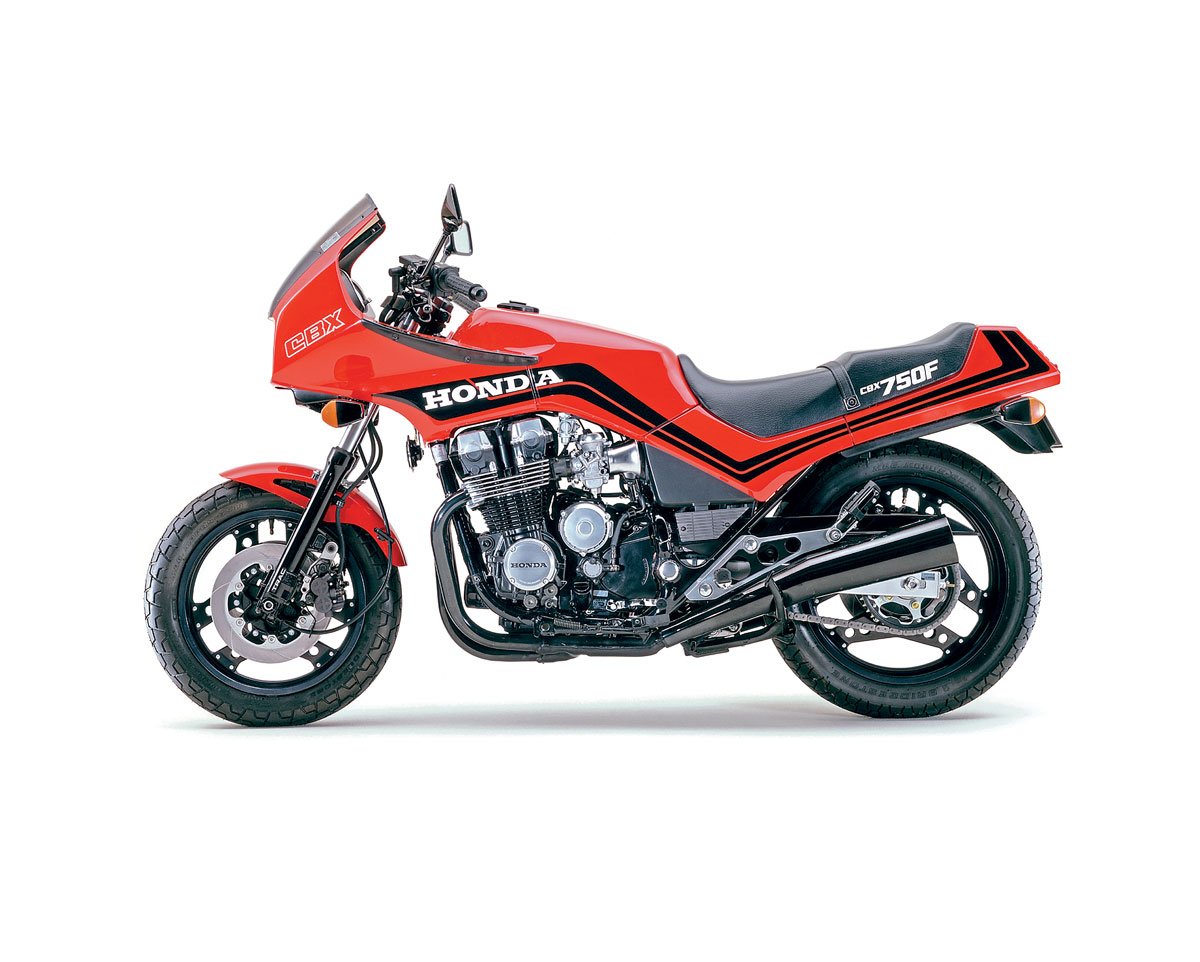 Front wheel
The earlier models had a 16in front wheel, which could prove problematic nowadays when sourcing a tyre of the correct size – in this case, a 110/90x16in, it being much narrower and a higher profile than the tyres fitted to more commonplace bikes such as the early Honda FireBlade.

Front brakes
Thankfully not sullied with the somewhat quirky inboard discs that were fitted to the early CBX550, the twin discs are, even so, very much of mid-1980s fare (i.e., twin pot floating calipers on 281mm discs), so don’t be expecting one-finger braking that’ll get the front tyre howling…

Carburettors
While the bank of Keihin carbs appear to be fitted with neat aluminium bellmouths, this is a clever styling feature to give a sporty vibe. They’re false, and the carbs draw air from the usual style of airbox.

Rear shock
While being of the relatively new-fangled Honda Pro-Link design, the rear suspension doesn’t use a spring but instead has an adjustable single air shock, filled with pressurised air of up to 57psi, with the pressure is altered via a Schrader valve tucked behind the right-hand side panel.

Alternator/starter chain
If it’s rattling, check the combined tensioner and chain guide for wear and renew it if necessary. Yes, this was one of the first production bikes to have an alternator repositioned away from the end of the crank to help reduce overall width.

Exhausted
Like most Hondas – or any other Japanese bike, come to that – of this age, the exhausts are likely to be corroded to one extent or another. The collector box is, like other inline fours, susceptible to the orange worm, although aftermarket systems are available, usually of the four-into-one variety rather than the standard twin cans.

Camchain tensioner
A known weak spot, and if the standard one remains and the bike has done over 40,000 miles, prepare for disaster!

Top end
While many folk will tell you that they’re ‘self-adjusting’, the hydraulic tappets as fitted to the CBX only work to the tolerances given by oil viscosity and pressure, although they do – nonetheless – give a quiet operation once the initial rattle from a cold start has subsided.

Oily frame
The frame is seemingly a single steel tube affair; it follows earlier form in that it also contains some of the engine oil (in the front downtubes). Rather than replace a separate oil tank (as in the case of oily-framed Brits). This is to allow the use of a shallower sump and thus reduce engine height.