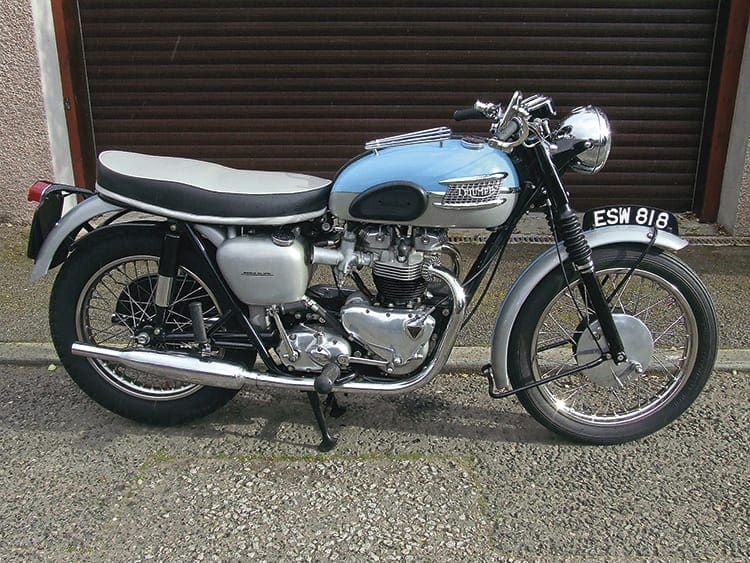 Instantly recognisable and loved by millions, it’s easy to fall for the charms of the original pre-unit Bonneville.

After the Second World War the American market began opening up to British manufacturers – pushed by the government to export. Building on the popularity of Triumph’s 499cc Speed Twin, an increase in size created the 649cc Thunderbird 6T. Debuting at the Montlhéry speed bowl near Paris in 1949, the Thunderbird went on sale the following year. The single carburettor Tiger 110 followed in 1954. A light alloy cylinder head was introduced in 1956 with twin carbs offered as an optional extra.

In the quest for speed Triumphs were a popular choice for both road racers and world record attempts. On September 6, 1956, American racer Johnny Allen used a Thunderbird engine to power the methanol fuelled Texas Ceegar streamliner, setting a new motorcycle land speed record with a two-way average of 214.4mph.

On August 28, 1958 Bill Johnston set a new record for standard machines, using ordinary fuel, averaging 147.32mph, again at Bonneville Salt Flats. The American Motorcyclist Association (AMA) ratified Johnny Allen’s record, but the Fédération Internationale de Motorcyclisme (FIM) refused to do so due to a technicality regarding the timing gear.

Triumph took legal action, with the ensuing publicity doing much to boost sales. In an inspired piece of marketing, Triumph hurriedly developed and launched the Tiger 120 Bonneville at the Earls Court Show in 1958. Citing the Bonneville as ‘the world’s greatest and fastest standard model’ Triumph could not have anticipated just how enduring the name would become. It is the one motorcycle model name instantly recognisable to most people the world over. Wherever you stop, regardless of whatever British, Japanese or European bike you ride; large or small, classic or modern, standard or modified, people will almost always come over and mention the Bonneville.

Based on the same engine as the Tiger 110, the Bonneville saw the three-piece crankshaft replaced by a new, stronger one-piece design, with hotter inlet cams. Widely splayed inlet ports on the eight bolt alloy cylinder head accommodated twin Amal carburettors. Having no float chambers, these were supplied by a separate Amal GP chamber. This clamped onto the seat tube between the carburettor bellmouths, though some owners reported intermittent misfires and fuel starvation.

The T120 designation indicated the potential top speed. Percy Tait, Triumph’s works tester (see pages 58-66 for more on Percy’s exploits), may have managed 128mph at MIRA on a development bike, but the 46bhp production Bonneville was realistically more capable of around 110mph, although it possessed the potential for further tuning. Initially, the Bonneville shared the same single downtube frame as the Thunderbird. This featured a bolt-on rear subframe and rear fork (swingarm) assembly that pivoted on a pin. Attached at the base of the seat tube, this was subject to sideways movement and if not properly maintained, it was prone to wear and tear. A steering damper was fitted as standard and sporting extras included a rev counter and timing cover with rev counter drive, a quickly detachable wheel, humped racing seat plus the option of alternative gearbox ratios.