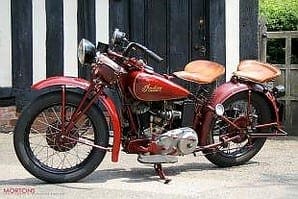 At Christmas, a guy in the pub got talking about my bike outside. “The first motorcycle I ever saw as a child was an Indian, a huge bright red thing. My mother was ill and the doctor came to see her on it. I remember the sound of the bike coming up the drive and I ran to an upstairs window to see what it was. It made such an impression on me that I always wanted a motorcycle, even though my parents were against it.”

Be it a piece of fact, fiction or snippet of folklore, there’s always another tale to add to the vast embroidery that is the Indian heritage. But why is this? What is it about them that so captivates us when we have so many of our own home-grown legends to admire?

Is it sports success, like the mighty Norton? Well true, Indian did score a one-two-three victory in the 1911 TT, and the year before none other than WO Bentley (of Bentley car fame) was one of three Indian riders to do the same at Brooklands. Oliver Godfrey, Charles Franklin, Bert LeVack and American Jake De Rosier all set records on Indians at the famous circuit, and in the early 20s, Freddie Dixon scored a second and third place on the Island and won the Belgian Grand Prix riding one. 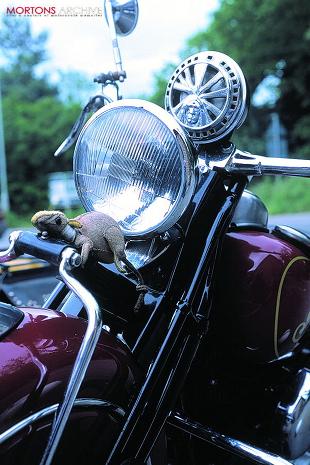 Or sales success maybe? Well, hardly – despite the finest efforts of Billy Wells, the Indian Sales Rep in the UK, the Chancellor of the Exchequer’s 33 per cent import tax on foreign motorcycles, introduced in 1925, put paid to that.

Or is it simply that the Indian, distilled through time, has come to represent the quintessential motorcycle? Compared to British machines, they were always big and powerful, the 1200cc Chief and the 1265cc Four being the epitome of the American Dream – anybody who rode one of these monsters in the 20s and 30s had ‘success’ written all over them.

Wall of death
Indians were the favoured brand of the legendary, gun-toting Highway Patrol, Hollywood stars were photographed on them, Wall of Death daredevils rode them repeatedly to within a hair’s breadth of oblivion, and their flashing chrome and lights and wailing sirens assailed the senses on every seaside esplanade coin-in-the-slot ride from Cullercoats to Whitley Bay. The stuff of dreams no less.

Perhaps that is why most of the breed are tucked away in museums and private collections, rarely seeing the light of day. Although it doesn’t have to be that way. When I ended my brief affair with the marque, there was nothing but a handful of rather fusty enthusiasts keeping body and soul together with baler twine and dogma. Indians were a lost cause, nobody rode them and nobody wanted them. If you were unfortunate enough to have to use one for daily transport, you never knew where your next head gasket set was going to come from.

Deep valances
Nowadays, nobody is going to get too upset if you chrome plate the handlebars of your 741B, add deep valances to the mudguards and paint the whole thing a shocking sky blue. On the other hand, if you rub it over with an oily rag and leave it pretty much as it was when it was dragged out of a hedge in Shropshire 40 years ago, that’s cool too.

There are proper companies making an honest living in parts and services, a manufacturer of Chief parts that are better than the originals, and easy access to Indian believers all over the world through the power of the internet. Spares for some models, like the Sports Scouts, are scarce, and there’s always the odd rogue prepared to fob you off with a pile of junk if you don’t do your homework before you start throwing cash about. Take advice when it’s offered, think with your engineer’s head (or find a friend who has one), but above all have fun.

Nowadays, it seems, is the time to own an Indian. 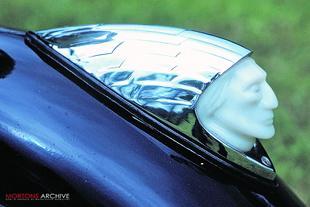 Spare parts for old motorcycles are invariably hard to come by, and when the good stuff runs out, as surely it always does, the dedicated rider finds himself between the proverbial rock and the hard place – use cheap pattern parts or patch things together with somebody else’s throw-outs. Either way, there isn’t a good choice.

Kiwi Mike Tomas figured he could do something about that, at least as far as Indians were concerned. The story goes that a fresh-faced Kiwi Mike learned his trade breathing new life into a decrepit 741B, then set off from his home in New Zealand to cross the Big Water to the USA, armed only with a pair of clean socks and a Rockwell Hardness Tester – presumably one of the portable models.

Mike and wife Carolyn set up business in 1988, working evenings out of a garage, and are now one of the largest producers of Indian spares in the US. But they don’t just make spare parts, they make better spare parts. Although you’d be hard pressed to tell the difference from the outside, their engine and transmission parts are manufactured to far higher standards than were ever dreamed of in the days of the Wigwam.

Materials, production processes, technology as a whole, has changed beyond all recognition – what, we can only wonder, would Oscar Hedstrom make of a CNC milling machine, and where would the Indian Motocycle Company be now if George Hendee had had access to the internet in 1915?

So, whether you want a bolt for your mudguard, or a complete, off the shelf engine unit, you know Kiwi Indian can supply the goods, that they’ll fit, and that the quality is second to none. More info on the KiwiIndian website.