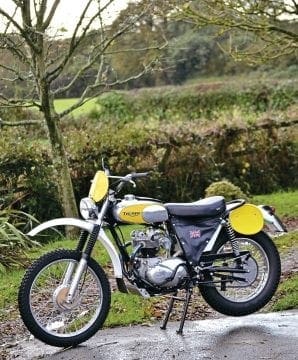 I really enjoyed your article and photos in CDB on the 1973 ISDT.

It brought back many memories for me as I was there as a member of the RAF team alongside Jonathan Tye and Ashley Wirdnam.

No doubt we are somewhere in the background at the time your photos were taken.

I well remember the efforts by the environmental lobby to get the event cancelled and the dismay among riders and organisers.

Happily, as you say, they failed. At a social gathering when the event was running a local lady made a telling comment to the three of us, saying that she and other locals were surprised how old and nice all the riders were, adding: “We were all so worried that you were going to be young bandana-wearing rednecks and you are not like that at all!”

We were entered on 125 Monarks, one of the nicest bikes I had ever ridden.

I found it a joy to ride; taut steering, good brakes and quick. Sadly I didn’t do the bike or team justice thanks to a loading accident in transit when I managed to trap my finger in the rear sprocket which pulled my finger nail out and exposed the finger tip bone.

I was quickly repaired by USAF medics but on pain killers and detuned. My ISDT hopes were short lived as on the morning of the first day I clouted a hidden rock at speed breaking my foot and bending the footrest.

I managed to finish the day (a painful experience on a six-speed 125) but unable to walk on it. The hospital confirmed it was broken and I was plastered up.

It was a great event, superbly organised, hosted by generous and friendly people who took us to heart and made the three of us feel part of their family.

The only repayment we were able to make, which was gratefully received, was to fix an almost-new Triumph 110 of theirs, which had been gathering dust in a shed for some months, as a non-runner.

The problem was down to a shorted-out kill button– speedily fixed!

Thanks for the info Dick, wonder if any of those Monarks still exist…