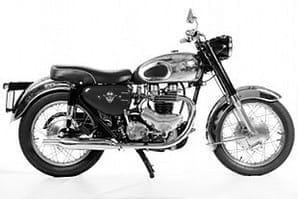 The AJS-Matchless OC was formed 60 years ago, following an advert in the Daily Telegraph, posted by the late John Trant, asking like minded AMC riders to meet at the Ace cafe with a view to forming a club.

The subsequent meeting in January 1952 resulted in the AMCOC being formed, later changing to the AJS & Matchless OC, being more representative of the AMC marques of the day. Club members commemorated the event by re-visiting the Ace in January, 60 years after the first meeting.

The club will be celebrating its diamond jubilee throughout the year and the president and club chairman are taking on a John o’ Groats to Land’s End run. This will take place over May 7-11 using 500cc twins, an AJS and a Matchless, both made in 1952. Both bikes were displayed at the Ace to promote the two charities supported during the run, these are Brain Tumour Research and Southampton Sight (a local charity for the blind). To make donations online see www.justgiving.com for BTR and uk.virginmoneygiving.com for SS. One of the bikes will be then offered as a raffle prize to be drawn later in the year.

The club will be back at the Ace on Sunday, June 24 for the AJS-Matchless day when there will be a ride-in by members from various parts of the country.