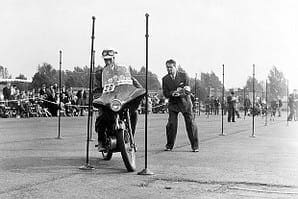 The riders pictured are getting ready for the start of the 1923 Leinster 100 Miles, the first road race to be held in the Republic of Ireland since the Gordon Bennett races in 1903.

Today, Irish road racing still attracts a big following but back then an estimated 40,000 crowd lined the poorly surfaced 11 mile course at Dunshaughlin, County Meath, within 15 miles of Dublin. Despite the huge crowd, The Motor Cycle reported that: “It was an easily managed crowd with the Irish crowd giving every facility to the police and military who assisted the army of stewards.”

Fifty-two of the 64 entrants came under the starter’s control, but only 18 of them completed the 100 miles within the 30 minutes of the winner passing the post. The race was won by N P Metcalfe on a 976 Brough Superior, but only after the handicap times were taken into account.

Fastest man on track was Graham Walker – in what was to be his last major race on a Norton. He started off scratch – virtually last man away – with more than 50 riders in front of him, but still set the fastest race lap at 10min 40sec.

He only stopped once to refuel and had no other issues. His race time was 1hr 40min 25sec compared with Metcalfe’s 1hr 41min 23sec – but Walker lost out by 12 seconds thanks to the handicap system.

With four different classes, the handicap system was employed to produce one outright winner with riders setting off as per their handicap interval time. The system worked well, with Stanley Woods third on a 348cc class Cotton. His actual race time was 1hr 46min 15sec but he was only 32 seconds behind the winner on corrected time.

Metcalfe was awarded the Hutchinson Trophy for his race win by The Motor Cycle which also highlighted what it called a ‘notable performance’ by E E Jones who “on a 225cc two-stroke Enfield, travelled at a very steady pace completing the 100 miles in 2hr 39min 50sec, and winning the guinea offered to the last competitor who finished within 30 minutes of the winner”.