Having already proved that they could up the stakes in the Chinese import game, Mash Motorcycles have added two new models which will likely further undermine the cheap ’n’ cheerful image that damns with faint praise our view of that country’s motorcycle manufacturers. 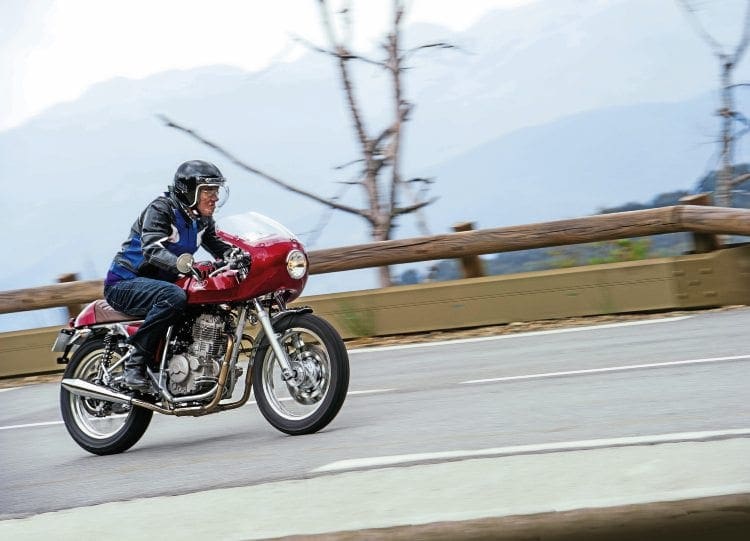 And so welcome to the TT40 – a fully developed café racer model which admittedly uses the same 397cc SOHC engine that Shineray, one of China’s biggest manufacturers, originally built for Honda’s GB400-TT – a smaller, Japan-only version of the undeniably café racer-ish XBR500 we got back in the Eighties.

Interestingly if not oddly, its 4-valve, SOHC engine’s 85 x 70mm and 8.8:l comp ratio are dissimilar to both the GB400-TT’s (at 84 x 72mm and 9.2:1) and the XBR500’s (92 x 75mm, and 9:1), but such oversquare dimensions do make for an agreeable revviness, and of course what all these engines share are a pair of counterbalance shafts which were to prove very effective. The orchestral accompaniment through the twin exhaust outlets, which feed a brace of Commando-style reverse cone silencers, is also most agreeable.

Although they offer a range of 125 and 250cc models in their home market, the French brand Mash – its name somewhat improbably taken from the long-running American TV series – have hitherto only exported their 397cc-engined Roadstar and Scrambler models to the UK, but that will change with the new 125cc Black Seven in November, with other capacity models likely to follow.