AJS and Matchless joined the move to the parallel twin layout for road bikes in 1948. 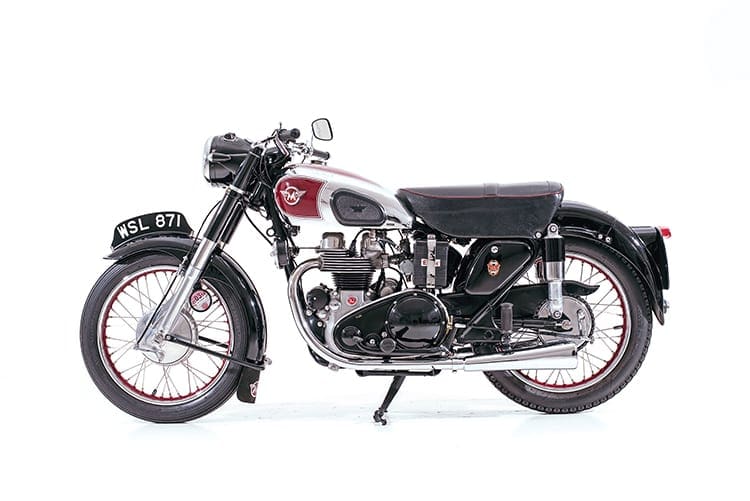 The AJS race shop had been at work on bikes other than big singles since before the Second World War, building its supercharged water cooled V4 which was originally designed as a road bike before the conflict and introducing the unit construction dohc 500cc Porcupine racer in 1945. Yet the first AMC post-war twin offerings, the Matchless G9 and AJS Model 20, followed conventional lines, being two valves per cylinder ohv parallel twins in a smart cradle frame. They appeared at the Earls Court Show in 1948, showing the G9 fitted with a dual seat and with megaphone silencers.

Meanwhile, the AJS had a sprung saddle and pillion pad arrangement and this may have been to attract more conservative buyers unconvinced by the newfangled dual seats. It’s a matter of taste whether the new swinging arm frames worked better with a dual seat, but fashion soon dictated a move to dual seats. The sprung frames were used from the start of production unlike the frames used by their rivals who also seemed reluctant to embrace the new technology. The Matchless bikes had a gloss black and shiny chrome finish, with the G9 being dubbed the Super Clubman, while the Model 20 was dubbed the Spring Twin. That name lasted throughout the Model 20’s production run.

The cycle parts used on the 500 twins would become standard AMC fitments in time, with their own Teledraulic front forks and with the famous jampot shock absorbers used at first. There were plenty of interchangeable parts from other models used as well. AMC intended the engine to be a good bit tougher than others on the market and used a triple bearing crankshaft. No other British machine had this arrangement. It comprised of a massive one-piece cast iron crankshaft supported on each side by roller bearings and with a Vandervell thin walled shell bearing in the centre. This was fed with oil under pressure which then went through drillings to the big end bearings. The engine was fitted with a hefty twin gear oil pump to keep the lube circulating.

The intention behind the use of central bearing was, according to AMC, to “operate to very high RPM while remaining rigid”. Yet the AMC twin was considered vibratory, even for the time. The engine used separate barrels that were heavily finned to tackle cooling and the rocker pedestals were cast integrally with the heads to try and keep things oil tight. The engine was later used as the basis for the G45 twin cylinder factory racer fitted in an AJS 7R frame, though an early effort to bench test a racing engine using the road bike’s crankshaft saw the cast-iron item explode dramatically. A steel crank was hastily fabricated for racing which at least held together, but it increased vibration to an almost unbearable level for the rider. The cast-iron crank was part of a design that changed little over the course of the next few years, the first significant change being made in 1952 when a new Burman gearbox was adopted across the AMC four-stroke range. Later the jampot shock absorbers were dumped for more conventional Girling items with an AMC model-specific clevis bottom mount.

A race-prepared G9 won the Manx GP in 1955, proving that the engine was no slouch when set up properly. In 1957 the gearbox was changed again as AMC introduced its own one-up-three-down design and used it in the AJS, Matchless and Norton marques. The box turned out to be excellent and continued in use until Norton Commando production came to an end in 1978. The later G9s and Model 20s were fitted with full width alloy brake drums, which were intended as an improvement over the earlier half width variety and there was a QD rear wheel with a rubber cush drive. A Lucas magneto was mounted behind the engine, and there were a pair of gear driven camshafts front and rear, hidden behind a handsome badged timing cover.

A front mounted dynamo, later changed to a crank mounted alternator, provided the electricity. Later models also got a stylish cast alloy primary chaincase. The twin-cylinder engine underwent a number of capacity increases and the 500cc twin version had, by the end of the 1950s, slipped below the radar of those looking for a performance mount. Instead it had become a more sensible ride-to-work and touring machine. Production of the G9 and Model 20 was finally discontinued in the autumn of 1961 while the 650s that had grown out of the design carried on for another five years.

Anthony at the west Wales classic bike dealership says that these days, for reasons probably to do with fashion, the Matchless G9 is slightly more popular than the AJS Model 20 on the classic market. It is possible that the G9 looks marginally more appealing with the winged M tank badge, because apart from that there are few differences between the Matchless and the Model 20. The Clubman specification was intended to make the G9 sportier, though Anthony said, with a chuckle, that the Clubman produces a huge half-a-horsepower more than the standard machine. A good useable AMC 500 twin can be had for around £4000. When you compare this with BSA A7s which are passing £5000 and unit Triumph 500s which are nudging £8000 for a smart Daytona, this makes the AJS/Matchless offering something of a bargain.

Read the full story in the August issue of CBG!