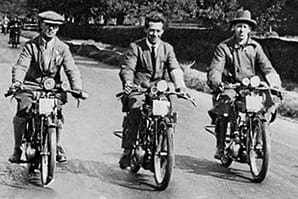 The September 20, 1923 issue of The Motor Cycle carried a report of the Miniatures Test, carried out by the Auto Cycle Union.

The ‘test’ attracted an entry of seven machines not exceeding 125cc and 18 machines under 175cc – all 25 of them being popular models of the time. And of the over 175 entries, 11 were fitted with Villiers engines in different marque chassis.

The smallest machine was a tiny 43cc Clement, the only four-stroke engine in the group and described by The Motor Cycle as having an “overhead valve cylinder modelled on the lines of the Gnome aeroplane engine.”

The ‘test’ resembled a trial but was carried out primarily on public roads and started in the centre of London – with Miss Debenham delayed by half an hour due to an excess of oil in the carburettor of her 170cc McKenzie.

The route, to be ridden at an average speed of 15mph, took riders from London to Brighton and back again. As well as riding to a time schedule, bikes were judged on price, weight, starting efficiency, braking efficiency, hill climbing, silencing, fuel consumption and reliability.

Bike starting ranged from one kick, or a few yards of pushing, to FW Cattrell’s five kicks and running 12 yards to start his 147 Ajax Junior. In braking efficiency, A Clement on the 43cc Clement suffered the worst retardation, only getting a ‘poor’ in the report where most were giving a ‘VG’.

Ironically, the only machine to retire from the test was also the most expensive to buy… at £42. T G Meetens’ 147 Francis Runabout succumbed to a damaged magneto.

No one failed the Reigate Hill climb test and The Motor Cycle said: “Everyone climbed the hill satisfactorily, but there was a good deal of pedalling, light pedal assistance perhaps, but human assistance nonetheless.”

The 116 JD ridden by G Griggs was the closest rival at 155mpg, while E Cooper’s similar 116 JD only managed a piffling 75.25mpg! Fourteen of the machines averaged more than 100mpg.

This photo was sourced from the Mortons Archive.