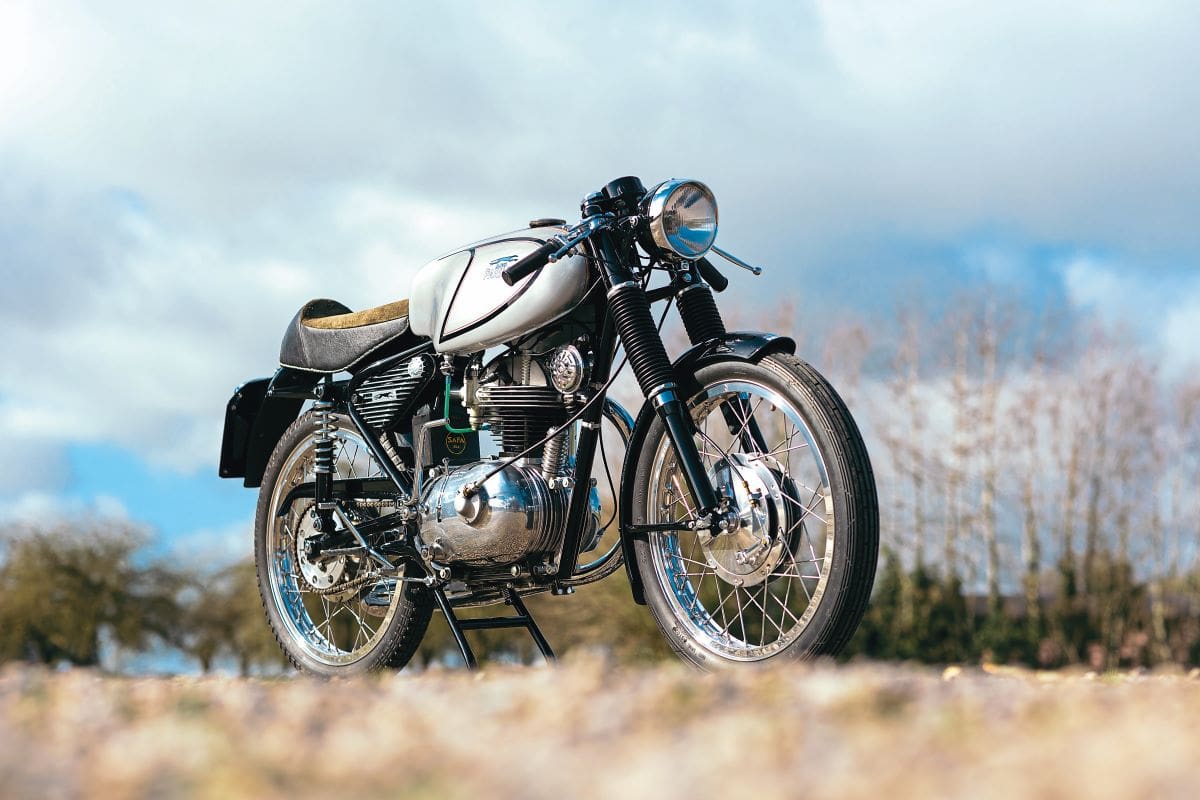 This wonderful bike has a wonderful story behind it, and the result is stunning.

I’d arrived at the Bath and West Showground for the Bristol Classic Show a day early, just to scope out the entries and see if there was anything that might be worth investigation. As I secured my Moto Guzzi, a motorcycle was wheeled out of a neighbouring van. And it was this stunner. I knew nothing about Parillas, but the whole stance of the thing, the superb finish, the lines, made it one of those unignorable motorcycles.

This 1960 Parilla was restored by John Crookes. “This is the high cam engine with short pushrods to the rockers – it will rev to 8500rpm and used to see off British 650 twins on the road,” he said.

The MSDS F3 is how it came out of the shop – though in reality it’s so much better than when it was new. Buyers could specify the use of the gear-driven cam, but it cost an extra third of the total price of the chain-driven item. 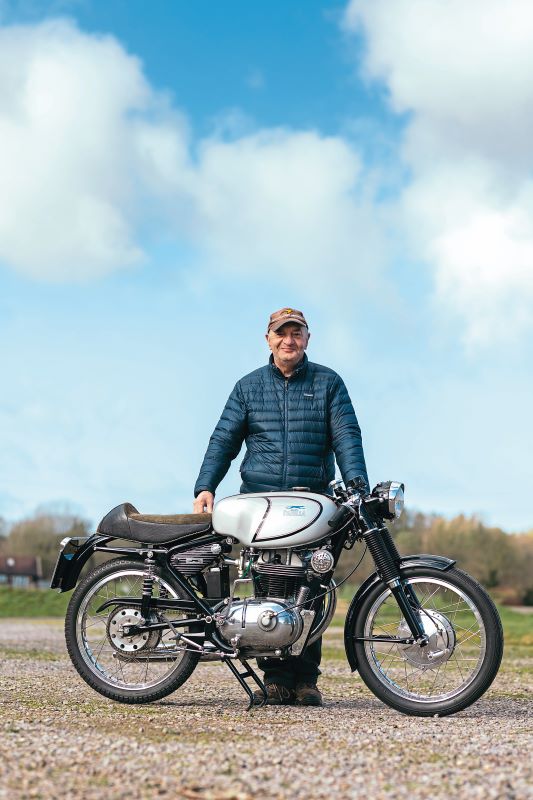 John said: “It’s fantastic for the early 1960s and up the scale on the grin factor. It’s got a lovely, throaty exhaust note and has exclusive novelty value.”

He restored the paintwork: “It’s got Norton-style stripes as old man Parrilla thought Nortons were the best bikes ever made. It’s a good fun riding machine, but you can tell the suspension is from the 1960s. The racers just tore the mudguards and lights off and went racing.”

The journey to this restoration began in 1983. John, a former bike mechanic turned go-kart engine tuning specialist, had a kart with a Parilla engine when he was pointed in the direction of another Parilla, an earlier red Special Sport model that came with a spare engine.

The red Parilla was restored and the spare engine stashed under a workbench until 2001, when John decided to take a look – and he was amazed to find it had the exotic gear-driven cam rather than a chain. “It was a little bit special,” he said, with commendable understatement. With a rare engine in his possession, John decided to try and find a frame to put it in.

By now John had sold one of two red Special Sports, and in 2005 he contacted the buyer to see if he would sell it back. He didn’t want to but did say he had a spare frame, tank, and wheels he would part with. When John checked the frame, he discovered to his astonishment that the number on the frame and on the engine number on the motor under the bench matched – he was able reunite the two for the first time in 40 years. Given that fewer than 10 MSDS models ever made it into the UK when they were new, matching the engine and frame after all this time was something John described as “very fortunate”.

With a bike like a Parilla, you can’t just call up a specialist parts supplier like you might with a BSA or a Honda. There were missing bits that would need to be sourced or, in many cases, created from scratch. The original control levers were missing, as were the clip-ons.

There might not be a lot of Parilla owners out there, but those who do have a love for them look after each other. John was able to borrow a set of handlebars and levers. He reproduced the ‘bars himself, and a model-making friend was able to mill the intricate Parilla Greyhound logo on each clamp. He had the foot pedals, gear shift and levers cast, and spent ages refinishing the levers so they were just right. A replacement for the missing rear brake plate was found in Italy, as were the correct San Remo rims. Everything was mirror-polished.

The engine got a specially-made new crank pin and camshaft, and the bike was converted to 12-volts and electronic ignition with kit from Powerdynamo.

As a production racer, Parilla had used a rev counter on the MSDS rather than a speedometer. This was a Smiths item, another bit of unobtanium. Fortunately, it used the same case as the D-shaped speedometer used on a lot of British tiddlers like BSA’s Bantam. One of these was fitted with rev counter internals, and a replica of the original Parilla face was printed and fitted. The reproduction transfers that adorn the centre of the petrol tank are typical of the period; Italian manufacturers used to like boasting about their sporting achievements.

The suede seat is as it came out of the factory, and the exotic finned toolbox covers are also factory-fresh and give the MSDS a unique look. The design of clutch operating lever is a joy, slotting smartly into the engine cases. There is a finned oil breather tower in front of the cylinder, and an intricate set of rear sets replace the standard 175 model’s gear shift. Both models have a heel and toe gear shift, but John’s is intricately slender. The kick-start is kinked to clear the rearsets. The DellOrto SS1 carburettor is as lovely a creation as you might expect. 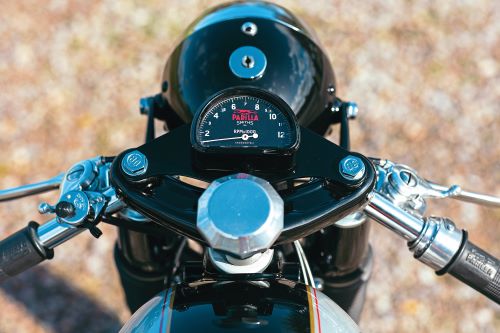 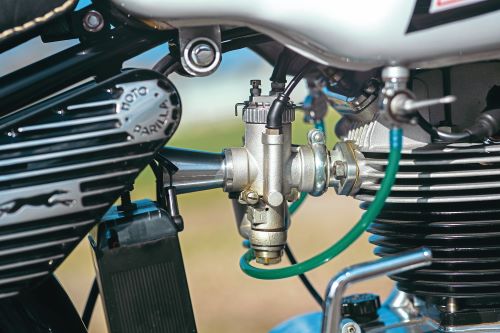 Compare the MSDS F3 to other Parilla 175 models and as well as the rearsets, you’ll see a number of detail differences. There are rubber gaiters rather than steel fork shrouds, and the rev counter drive mounted on the right-hand engine casing is missing from the basic model – if such a creation could ever be described as basic.

John’s restoration of the MSDS is little short of a masterpiece. It has been winning wins prizes at shows throughout the UK since it first emerged from his workshop in 2011, and has been recognised by Italian fans of the breed as one of the finest examples still in existence. It’s an inspiration to restorers of all kinds of classics. If you can build a motorcycle this good in your shed, you are onto a winner.

Who was Moto Parilla?

First of all, let’s get one thing straight. Despite the similar name, it’s a Moto Parilla – and nothing to do with Aprilia. When Aprilia was still making bicycles and spectacle lenses, Parilla came straight out of the Second World War making amazing small-capacity motorcycles and ground-breaking scooters.

When most postwar Italian manufacturers were building 50cc mopeds, under the ownership of Giovanni Parrilla (he dropped the extra ‘r’ for the name of his motorcycles for reasons lost in the mists of time), Parilla built a 250cc OHC single racer that would top 100mph. Giovanni, it is said, had a soft spot for Norton singles and the engine bore a marked resemblance to that of the Manx Norton, down to the location of the magneto and the design of the magneto drive. Much of the frame and cycle parts might also have come out of Norton’s factory in Bracebridge Street. 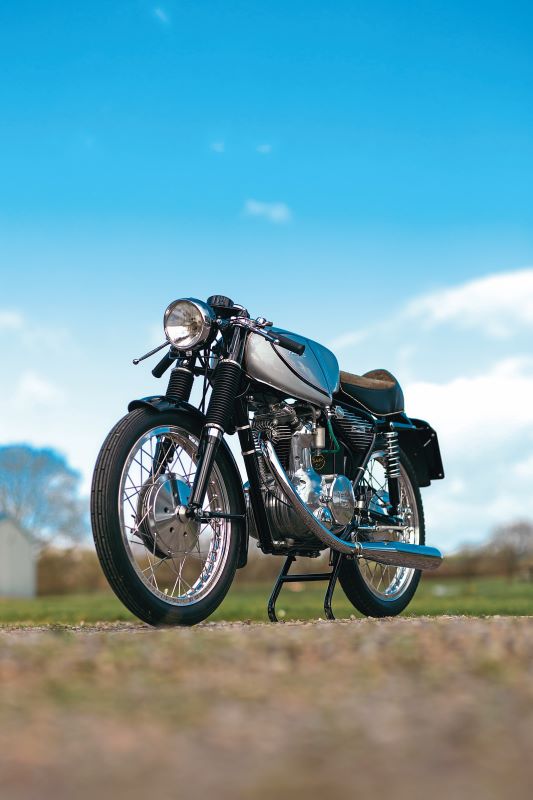 The 250 soon gained a second camshaft. This model produced 21bhp and, like Nortons, had exposed hairpin valve springs, with the magneto relocated to the front of the engine.

With the racer establishing the name, the company launched a number of exquisitely engineered road-going models, including 98, 125 and 250cc models, and then a 175 single with semi – ohc engine, where the chain drive to the single lobe cam runs up the left side of the engine and this operates two short pushrods to make the valves work. The racing models used gear drive to the cam.

The 175 arrived in 1952 as the 15bhp Fox Turismo, with a four-speed gearbox and a wet clutch and as the Fox Super Sport.  The engine was designed by William Soncini in 1951. There was a Lusso (luxury) Veloce and, strangely for the name of a small-capacity sports bike, the Bassotto, or Basset Hound. Giovanni had a thing for dogs, especially English dogs, and included a greyhound into the tank logo on the ultimate 175, the MSDS. This stood for Motocicli Sport Derivati Dalla Serie – or in English, production racer. A Parilla MSDS 175 came fifth in 1957 in the legendary Moto Giro of Italy, which took place until the Italian government banned public road racing.

The MSDS was a redesign of the 175 and came in a striking silver and black paint scheme. The engine is a ridiculously attractive bit of engineering. The camchain/gear tunnel castings are the focal point of the left-hand side. Valve springs on the MSDS wore out quickly, as the single cam and forged steel rockers put so much load on them. They wore out quickly, until Parilla had them made by a specialist company in Switzerland.

Giovanni Parrilla kept the company going, even designing a 125cc rotary-valve two-stroke attached to a five-speed gearbox in the early 1960s to update his designs, and efforts were made to fit an eight-speed gearbox to the MSDS, but the pursuit of speed at any cost did actually have a cost. The money eventually ran out, with Moto Parilla folding in 1967. 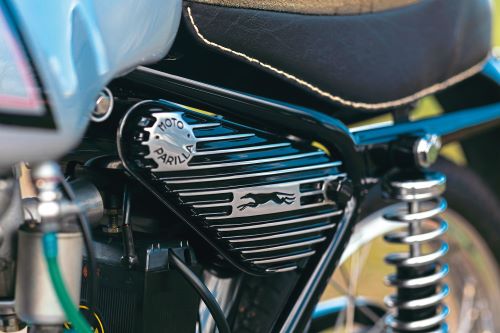 Racing in the US

The Moto Parilla machines were true racers for the road. The flexibility of the design meant that the engine could, and was, eventually taken out to 250cc for the American market. Cycle World reported that an amateur rider, Norris Rancourt, on a 250 Parilla that had started life as a 175 before being rebuilt by Orin Hall, came second in an AMA Lightweight 250 class at a Daytona meeting in 1964 – despite his megaphone exhaust falling off towards the end of the race, beating Yamaha, Suzuki and Honda riders in the process.

The race was won by Dick Hammer on an Italian-built Harley-Davidson. Hammer ran out of fuel as he approached the finish line, and Orin Hall believed that Harley had put special ‘hot’ fuel in its bike. Later that year in an FIM race at Daytona, Ron Grant, on a production racing Parilla, took second, seeing off several factory teams and being beaten only by Alan Shepherd on a factory-prepared disc valve MZ. Moto Parilla also won drag races and scrambles competitions, and were well thought of in the US. 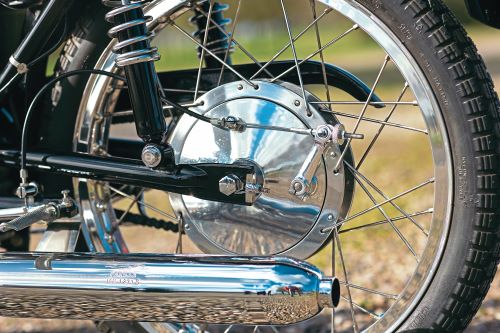 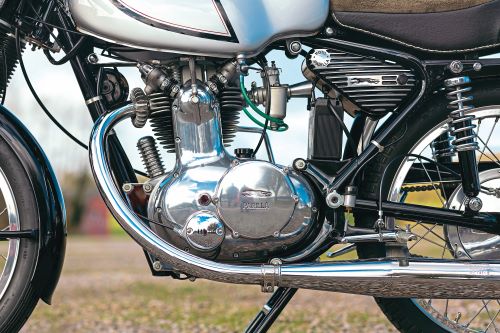 The excellent www.motoparilla.co.uk contains a wealth of information and technical help, including sections revealing the Parilla’s few weak spots. The camshaft has a single cam operating on both pushrods, which can wear badly; the camchain was a US design with no rollers. This was fine when the engine was new, but when the tensioner wore out, as it did regularly, the chain wore out too, as does the kick-start gear and the gear selector spring.

Information on how to rebuild Parillas is hard to find. As Mike, the site’s creator, points out: “It’s not the dismantling that’s the problem, it’s the mantling.”

Mike says that the only easily available workshop manual “is a great book if you are in the mood for a laugh, less so if you are trying to decide how best to check correct tappet rotation and cover alignment.”

“Written initially in Italian,” he said, “it has been ‘translated’ into English by someone I suspect to be neither Italian nor English. If ‘controlling motions of the internal organs’ sounds like checking the tappet adjustment of the engine, then you are in for a very enlightening read. Many diagrams and component measurements make it a worthwhile book to have though.” 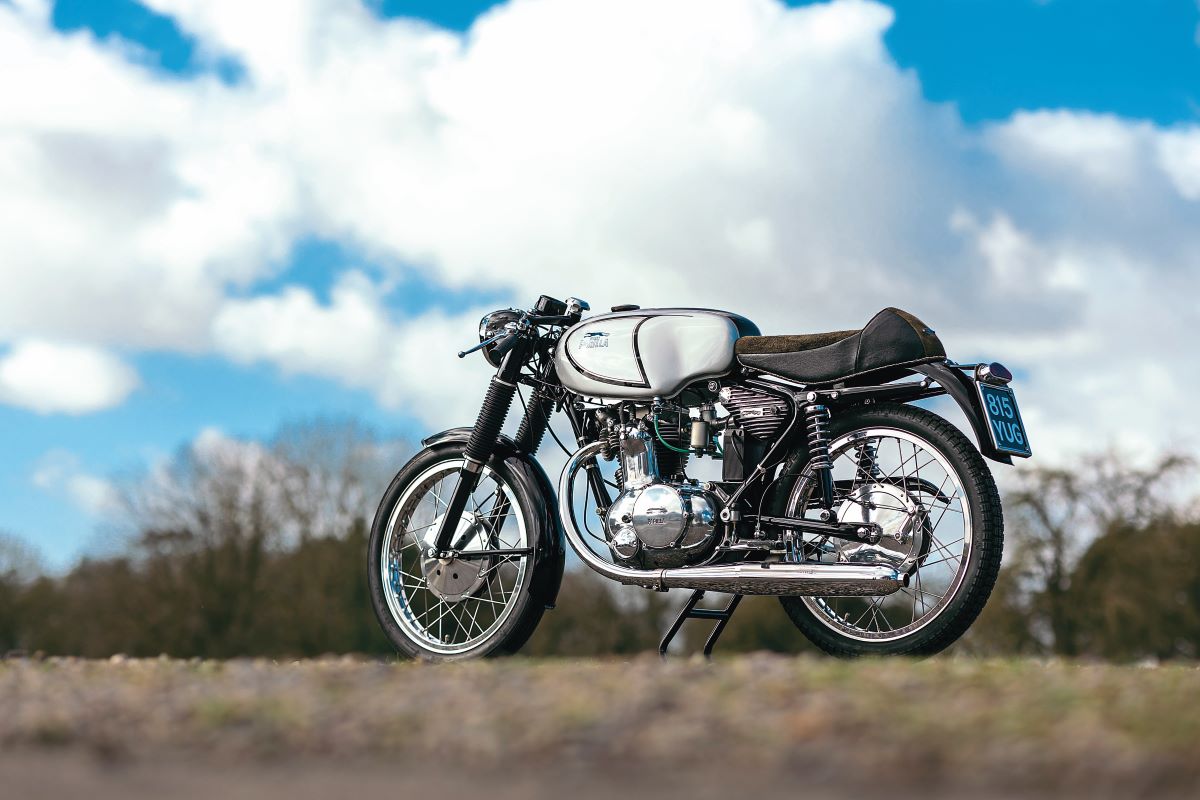