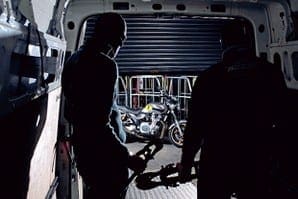 Police experts on motorcycle theft told CBG that classic bike theft differs from modern bike theft in a number of ways. Firstly, a lot of the stolen machines are broken up and sold as spares, but equally, anyone with a legitimate frame and crankcases can build an immaculate and valuable classic using all the unnumbered parts from a stolen bike.

The other problem is that many classic owners don’t take the risk of theft as seriously. Ours is a friendly, sociable scene. For many riders, the idea that someone might steal their bike is unthinkable.

But what really got our blood boiling here at CBG Towers was a tale that came in a few months back that a handful of stolen classics had been discovered being sold at a scrap metal dealer simply for the value of the alloy and steel they were made from.

And the same police experts (who didn’t want to be named) told CBG that, in many cases, once the theft has occurred, there’s little the police can realistically do about it. Those bikes that don’t get broken up in the UK, often end up going abroad and either being given new identities or broken up there for spares.

So the message is, it’s up to you to protect your bike and with that in mind, we’d like to present the CBG guide to real world, affordable bike security…

1 Keep it hidden
Most thefts of classics are from garages and sheds. If a thief doesn’t know your bike is there, it’s less likely to disappear. So avoid leaving it out on display after you’ve cleaned it, be wary of any vehicle that follows you home and don’t give out your address unless you know why someone wants it.

2 Be vigilant
When you park up at the bike meet, use a lock. Even if it’s just a simple padlock around the drive chain that’ll take the chain off if someone rides off with it. Leave yourself a reminder that it’s there though or it’ll be you on the floor. Few disc locks work on classic brake discs, but a half decent U-lock will fit through the forks and is easy to carry.

3 Pea gravel
Any determined thief will get past most of the security you’ll fit. Pea gravel around the shed will at least make you aware there’s someone scrunching around out there.

4 Take a picture
If you do hear someone mooching around outside, think carefully before getting stuck in. We know of three people getting seriously hurt tackling bike thieves. Instead, grab your phone or a camera, hang out of the window and take a picture. The flash alone and fear that you can identify them will scare most of them away. As soon as you’ve got the snap, call the police.

7 Keep it covered
If your bike has to live outside, get a bike cover. Preferably a dull coloured, anonymous looking item that blends in.

8 Security marking
Products that mark key components of your bike so should it be stolen, the parts can be identified as belonging to your machine. Thieves hate this stuff because it multiplies their risk of getting caught enormously. Smartwater, Alpha Dot and Datatag are the most popular. They all work in slightly different ways, but the important part is the sticker on the bike warning that the system is fitted. A huge deterrent for not much money.

9 Know the risk
Seven of the top 10 UK theft hotspots are in London, followed by Huddersfield, Sutton and Twickenham. Rural areas tend to be safer, but they also have garages and sheds further away from the house and fewer close neighbours to keep an eye out for you.

11 Don’t be part of it
Websites such as eBay have made disposing of stolen bikes and parts much, much easier than before. If you come across something suspicious while trading on there, report it to both the website and the police. Frames sold with logbooks and crankcases with engine numbers should be banned from sale, but there are plenty more subtle transactions going on and the global nature of modern trading makes it much easier to unwittingly buy something dodgy.

12 Be smart when selling
Many of the most common scams involve theft of bikes for sale. A seemingly interested buyer calls and asks for your address. They don’t show up to view the bike but two nights later your garage is broken into. Or they leave their car as security for a test ride – it turns out to be stolen. Or they pay with a forged banker’s draft.