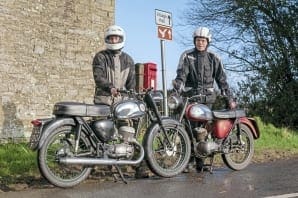 I’ll happily admit that I did, in fact it was what I learnt to ride on, a rigid-framed D1 which for some absurd reason I hand-painted white. And gold. But despite their ubiquity – depending on whose figures you believe, between 270,000 and 400,000 of the little blighters were built in their various forms – they’re little lauded by the classic cognoscenti.

But let’s forget them for a moment, for the BSA Bantam Club has almost 1200 members – arguably the biggest single model outfit in the UK – and as an everyday ride, let alone a starter classic, it’s hard to think of a better bet.

One man who certainly thinks so is Nick Bramley, a cheery soul who has successfully turned a hobby into a business, rather cunningly called Rusty Rooster Motorcycles, based in Kington just up the road from me in the Welsh Marches.

Explaining himself, Nick worked for various south London bike dealers from the early Eighties onwards, starting at Doble in Coulsdon, then Motorcycle City and later Cooper BMW in Tunbridge Wells.

“And I came across a little company called T&G behind Aero-Suzuki in Norbury, which had a good business just doing Bantam repairs and spares, and taught me that specialising in something, and doing it well, was a good way to earn a living.”

Read more in the March issue of CBG