A brand-new MV Agusta motorcycle, the very first of the limited-edition series created as a tribute to 15-times World Champion Giacomo Agostini, will be auctioned in Bonhams Goodwood Festival of Speed Sale on Friday, June 24, with all proceeds raised being donated to the UNICEF Ukraine emergency fund.

This special lot will also include the MV Agusta Experience consisting of a visit to Bergamo for a dinner with Ago, a tour of his private museum and a photo shoot with the Grand Prix legend. The estimate of this superb one-off package is £70,000 – 100,000, with No Reserve.

The 2022 MV Agusta 798cc Superveloce Ago Limited Edition, motorcycle is an ultra-exclusive version of the hand-built retro sportsbike honouring the racing successes of ‘Ago’. It is Number 1 in the series of 311 motorcycles, a total reflecting the number of races won by the Italian over his 17-year racing career.

The first 15 motorcycles in the series are dedicated to each of his 15 World Moto GP titles – a record that still stands in the sport – with this motorcycle representing his first win in 1966. Each of the 15 bears an exclusive carbon-fibre plate on its fuel tank commemorating the relevant trophy and year that it was won by Ago as well as the champion’s signature. 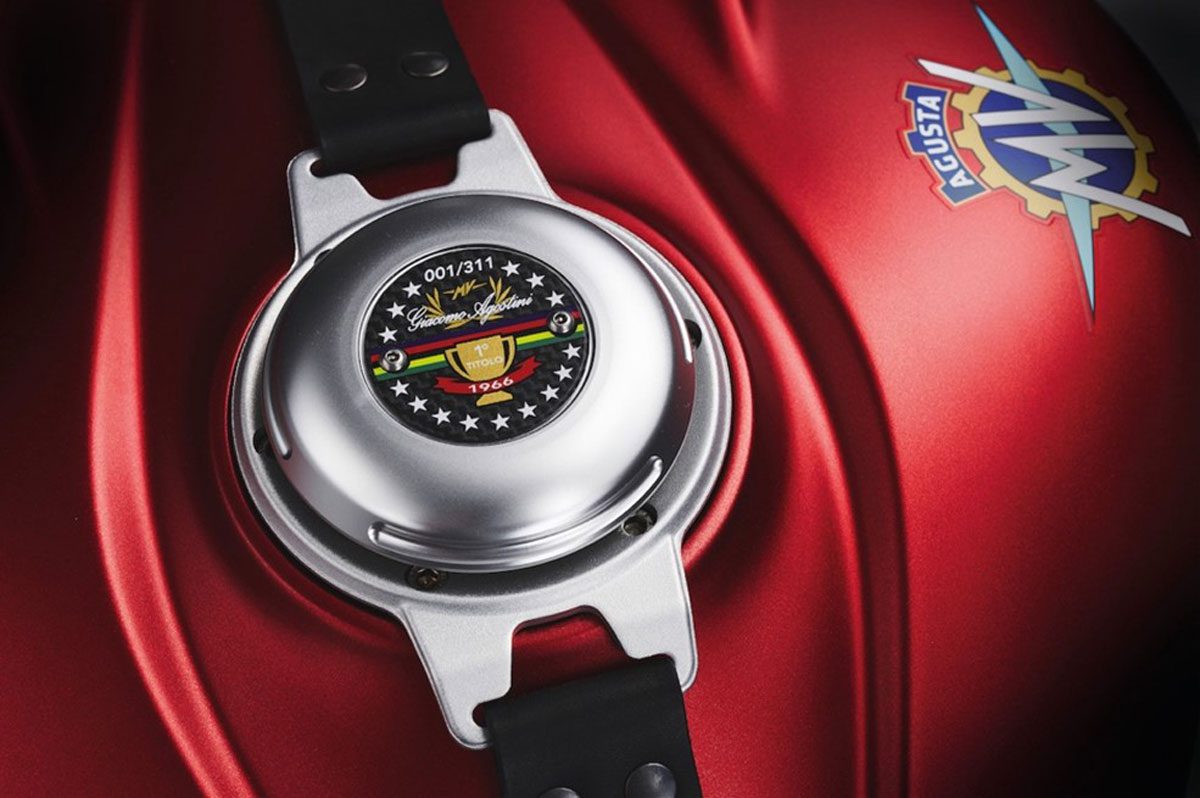 The Superveloce Ago lives up to its name, delivering a top speed of 149 mph (240 kmh) and 0-60 mph acceleration in just three seconds, produced from its 800cc three-cylinder engine, aided by its electronically assisted transmission allowing for lightning-fast and precise gear shifts. The power is matched by a top-rated Öhlins suspension and tempered by an electronics suite including traction control, wheelie control and launch control.

The racing-inspired machine also features carbon fibre bodywork, from its mudguards to the side fairings, and its livery echoes that of Ago’s own racing colours. The refined grey contrasts with the ‘Ago fire red’ and ‘Ago yellow’, with, of course, the coveted number 1 emblazoned on the fairing. The higher windscreen gives the motorcycle a distinctive appearance, resembling the MV Agusta three-cylinder racing bikes ridden by Agostini.

Its appearance is further enhanced by the addition of the MV Superveloce Ago racing kit, which includes an Arrow triple exhaust system, which boosts the power by 151bhp, plus an Engine Control Unit with dedicated engine mapping for maximum performance. An exclusive bike cover and a certificate of authenticity complete this charity lot. 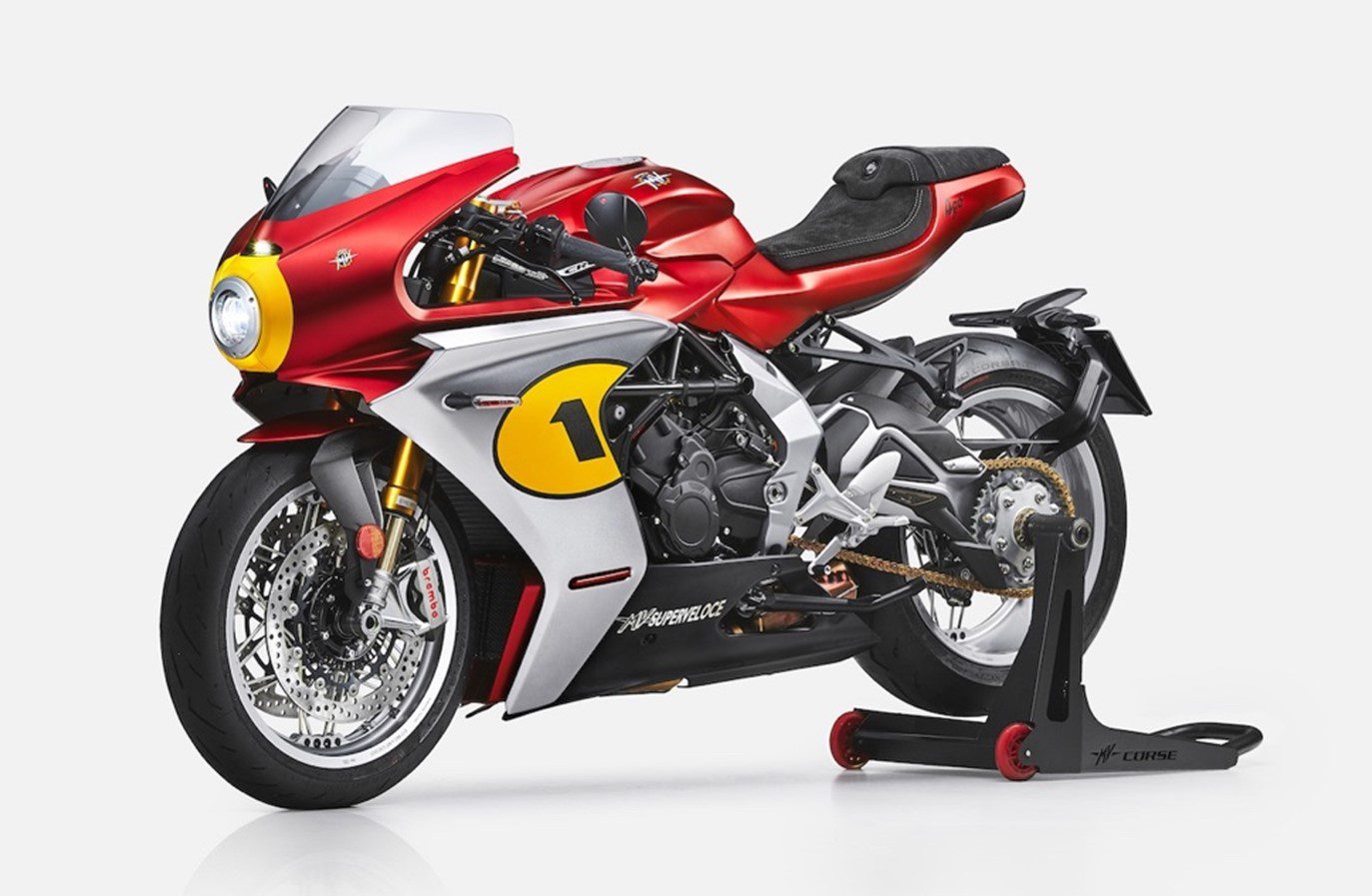 Tim Schofield, Head of Department, Bonhams Motor Cars UK, said: “We are delighted to honour one of the legends of motorsport, by offering this exclusive piece of motorcycling art, while helping to raise funds for a most worthy cause.

“This is a fantastic opportunity for any motorcycle collector to bid for and potentially to own the Ago motorcycle, following in the tyre tracks of the great Giacomo Agostini and to meet the champion racer himself.”

Timur Sardarov, CEO, MV Agusta Motor S.p.A., commented: “We are delighted to partner with Bonhams, one of the world’s most prominent and respected auctioneers, in offering some concrete help for this charitable cause. Our Superveloce Ago, a true piece of motorcycle art, could not be in better hands, and we are confident it will go to a passionate collector and true motorcycle enthusiast.”

The MV Agusta will go under the hammer on Friday, June 24 at a live sale in the Bonhams saleroom at Goodwood House.

The Goodwood Festival of Speed Sale will also be available on the Bonhams App, which provides registered bidders the opportunity to bid in real time online via Bonhams.com while watching the auctioneer and videos of cars on offer. Absentee and telephone bids are also encouraged.