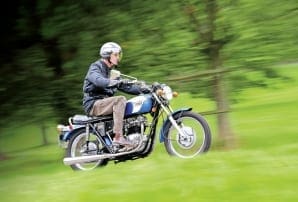 There is a reason why Triumph twins have always been popular. It’s a simple reason.

Have you worked it out yet? OK, here goes. The reason Triumph twins are so popular is because they’re great to ride. That’s it. Mostly.

There are other reasons, such as they’re good to look at and sound great and no girl – or boy, depending – can resist a Triumph rider, but basically, they’re great to ride.

Even the ones with a reputation that tells you otherwise are generally great.

OK, so the Newton Abbott twins can be really good to ride too, but they were made in Devon, not the Midlands, which affects some folk in odd ways.

They also still make Triumph twins, apparently, but they’re made in Thailand, which affects some folk in odd ways.

You can feel safe: this Triumph was made in Meriden, although its entire bicycle was designed by mostly BSA guys working at Umberslade Hall, which is a lot closer to Meriden than to BSA HQ at Small Heath, but still, it’s not the same.

Read more in the March issue of CBG