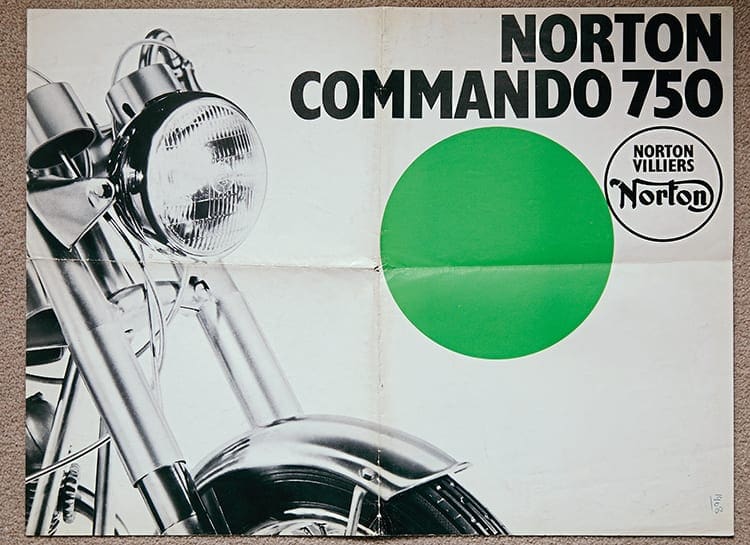 Dennis Poore watched with relish as Associated Motor Cycles began imploding under a mountain of debt. In 1960, AMC, the giant conglomerate that included Matchless, AJS, Norton, Francis-Barnett and James, had turned a profit of £219,000 but a year later the books revealed a massive £350,000 loss. And that was a huge sum of money – today it would have been up to £15,000,000 (euro 17,000,000). Villiers Engineering, which manufactured engines in Wolverhampton for small motorcycles like the James and Fanny-B, was also on the ropes.

The boss of Manganese Bronze Holdings, Roger Dennistoun Poore was not your average company chairman. He had earned a Master’s degree in engineering at King’s College, Cambridge where he began by making his own vice drill from scratch – and very nice it is too. I know, because it is sitting on my workbench. Then he made his own bench drill, including pouring the molten metal for the castings. And he had some of the best and brightest tutors in the country, including Dr Stefan Bauer, whose CV includes Rolls-Royce, Norton Villiers and BSA.

Cambridge University had an active car racing club and Poore was soon hooked. But before he had time to make much use of his engineering degree, war clouds were gathering over Europe. Poore joined the Royal Air Force and, thanks to his leadership abilities, soon reached the rank of Wing Commander. When peace returned, so did car racing and Poore bought the ex-Tazio Nuvolari Alfa Romeo 8C-35 that had won the 1936 Donington Grand Prix. In 1947 he won The Gransden Trophy feature race in Great Britain’s first postwar circuit event, at Gransden Lodge aerodrome, and in 1948 the Alfa also starred in the inaugural race meeting at Goodwood. Poore and the Alfa went on to win the 1950 British Hill Climb Championship. He later drove a Connaught A-type in the British and Italian GPs, and joined the Aston Martin team to race at the Le Mans 24-Hours. Poore still owned the twin-supercharged, straight eight Alfa when he died in 1987. It sold for nearly £6,000,000 in 2013.

Poore also knew how to ride a motorcycle – aged 14 in 1930 he bought a new ES2 Norton from TT ace Alec Bennett’s shop – which might have sparked his interest in AMC and Villiers. He could certainly see the potential for a successful business, because as early as 1962 the company turnaround specialist came up with a proposal to rejuvenate the British motorcycle industry. His board of directors agreed with the plan and the ship propeller manufacturing side of Manganese Bronze was sold off to raise capital. Poore waited, and when the time was right he used the money to buy Villiers in 1965. By August 1966, AMC was in liquidation and Poore moved again to scoop up the assets from the Official Receiver.

James and Francis-Barnett were parked in a leaky garage where they could be forgotten, but the Woolwich works reopened in December under the new banner of Norton-Villiers Ltd (Norton-Matchless Division). The Norton range was slashed to two Featherbed framed models – the 650SS and 750cc Atlas – and the Norton N15 and Matchless G15 street scramblers. These hybrids used the Atlas engine, which had been stretched from the 500cc Dominator introduced way back in 1947, dropped into a lightweight Matchless duplex frame with Norton forks and wheels.

They were good bikes, but carrying on as usual wasn’t an option. If Poore was going to save the British motorcycle industry he had to come up with something new. Fast. And that meant a new team.

The first man he called was Dr Stefan Bauer. Poore’s old lecturer was an Austrian, born and educated in Vienna. While at Cambridge University, Bauer joined a top secret team trying to develop a bomb using uranium-235. In 1940 he travelled to Montreal to work on the Anglo-Canadian-American atomic bomb project (uranium was a waste product from radium mining in Canada). After the Second World War he returned to the UK to develop nuclear power reactors before becoming chief nuclear scientist on the Rolls-Royce nuclear submarine programme, where he patented a method for producing canned fuel rods for nuclear reactors.

Doc Bauer was 58 years old when he joined Norton-Villiers on January 1, 1967 as director of engineering. Standing 1.6m tall and looking more like a bank manager than a nuclear scientist, there was no doubt that Bauer had a brilliant mind. He was also a modest man and camera-shy. But he was no motorcyclist. In fact, he had never ridden on one, so Poore needed experienced motorcycle development engineers to join Bauer’s team.

Poore was told that the best engineers at Villiers had left just before he took over. One was Bernard Hooper, who had joined BSA in 1952 as a design draughtsman at the Redditch factory, where he worked on updating the D1 Bantam and also a successor to the 500cc OHC Sunbeam S7 and S8 (the OHV S10 never made it to production). Hooper left BSA in 1956 and set up a design consultancy with Hermann Meier, another BSA engineer who really knew about strokers. Two years later Hooper was seduced by an offer from Villiers, where he would later design the Starmaker two-stroke race engine, but he left in 1965 before the company went tits-up. Poore and Bauer needed Hooper on board, along with transmission designer John Favill, who also worked on the Starmaker. In his mid-30s, Tony Denniss was already working for AMC in Woolwich, and had a reputation for getting things done on time. He would be in charge of turning prototypes into production models.

And then there was Bob Trigg. Always stylishly dressed and looking like he had just walked off the set of the American television drama Mad Men, Trigg specialised in designing the next generation of motorcycles. He had joined BSA in 1953 when he was only 16 years old, but quickly showed his potential and moved to Ariel where his prototype work included a 700cc four-stroke in-line four engined version of the Leader two-stroke twin. When Ariel’s Selly Oak factory closed in 1965 he joined British Motor Corporation, which made the Austin-Healy 3000 and the MGB, as well as the Mini. If Poore wanted fresh ideas, Trigg was the man.

Chief Engineer Bernard Hooper (engineer 1), Bob Trigg (engineer 2), Tony Denniss (engineer 3), and John Favill (engineer 4) would all report to Doc Bauer. Poore didn’t mess about. He told them that, if they were going to save Norton, they had to have a new motorcycle ready for the 1968 season, and that meant having it ready for a September launch at the 1967 Earls Court Show in London.

One quick spin on the back of an Atlas convinced Bauer that something had to be done about the vibration. He also dismissed the legendary Featherbed frame because there were too many bent tubes, despite the fact that it had been copied by countless manufacturers for their race bikes. The team met that view with amazement but Bauer responded by pointing out that the Featherbed was already 16 years old. Other factories had caught up with Norton in the handling department, and they needed a frame that was better than the rest. If they couldn’t design a better frame, they didn’t belong in his office. Bauer was a lateral thinker, and he expected his team to think outside the box as well. Doc Bauer is the unsung hero of this story. Those who worked for him described him as inspirational, although Hooper added that all his thinking was lateral.

The team travelled to the old AMC plant in Woolwich to check out the P10 prototype that had been in development for some years and was meant to replace the Atlas. They were not impressed. Over a metre in length, the timing chain was long enough to padlock a motorcycle to a lamp post and it rattled so much that the unit construction 785cc DOHC twin sounded like a tin of nails. What’s more, the P10 vibrated like an Atlas with loose engine mounting bolts. Rubber-mounting it in the frame didn’t help. The gearbox sprocket would move out of alignment with the rear wheel sprocket and the drive chain would jump off. But Bauer insisted that a large vertical twin couldn’t be rigidly mounted because of the vibration. They needed a solution. Hooper idly suggested that if they mounted the swingarm on the gearbox with solid bushes, the drive centres would stay in alignment. Then they could rubber-mount the whole lot in the frame to isolate the rider from vibration. And then he laughed, as if embarrassed by his own suggestion.

There was plenty to think about on the train back to Wolverhampton. Trigg had been mulling over Hooper’s idea, and told him that he thought it might work. But there was no getting away from the fact that the P10 engine was rubbish. The team had wasted time and resources that they couldn’t afford. With only months before the London show they began work on a new project.

Bauer and Hooper proposed a lightweight frame based on ideas from aircraft design, using a large-diameter tube as the backbone. All other tubes would be as straight as possible and only subject to compression and tension forces, not twisting. Trigg sharpened his pencil and sat at his drawing board. Between them they decided on a thin-walled (16 gauge or 1.59mm thick) top tube of 2.25in diameter mild steel, braced at the steering head with a short piece of the same tube. A duplex cradle in 1in diameter 14 gauge (2mm thick) tube ran from the bottom of the steering head, under the engine and up to a massive gusset plate that was welded to the back end of the top tube. Two 1in tubes ran between the middle of the top tube and the rear of the duplex cradle, close to the swingarm, with another 1in tube forming a loop for the seat and upper shock absorber fixing points. Made by Reynolds, the frame was immensely rigid. And it only weighed 24lbs, 10lbs lighter than a Featherbed. Bauer, Hooper and Trigg filed a patent for their design in the UK on June 7, and in the US a year later.

Bauer explained the vibration problem thus. Imagine an engine totally unsupported in space. Now, if the crankshaft is rotated slowly, the centre of gravity follows a heart-shape path around the crankshaft axis. Start the engine and it would oscillate around that path – which may be no more than 1⁄16in (0.063mm) from the shaft axis. If we could mount the engine on a suspension soft enough to allow it to oscillate in that way without transmitting oscillations to the frame, we would have the perfect suspension.

Hooper and Trigg pushed ahead with the idea of suspending the Atlas engine and exhausts, along with the AMC gearbox with final drive, swingarm and wheel as a single unit in a rubber-mounted subframe. This would then ‘float’ within the new main frame, but not twist. There were three rubber mounting points. A pair of Metalastik steel-and-rubber ‘cotton reels’ were used to secure the cylinder head to the frame. Both main mounting units were contained in steel tubes; one formed part of the front engine plates while the other was incorporated at the top of the gearbox cradle and also carried the swingarm pivot. Each tube contained rubber bushes, spacers, sleeves, thrust cups and shims to set the side-play at between 0.005 and 0.010 inch. Rubber gaiters were fitted to keep rain and road dirt out of the mechanism. On June 8, 1967 Hooper and Trigg filed their patent for the revolutionary Isolastic system as joint inventors. The patent offered the option of a threaded adjustment for side play in the main mountings, but these were not used because of cost.