"There’s a Lotta Torque about Norton” – so went the company’s advertising slogan in the early Seventies, immortalised by the photograph taken at the Ascot Park Flat Track in 1972…

Big-muscled parallel twins are the bikes Norton is best remembered for – a tradition continued by the new models trickling from the Donington Park factory. But it wasn’t always that way.

There was a time when motorcycles were owned first and foremost as transport. Even the most ardent rocker would use his bike on a daily basis for work, as well as trips to the cafe.

However, one Norton that would have been way off the radar for any self-respecting rocker was Norton’s 350cc Navigator; too small to be a roadburner, yet over the 250cc capacity limit allowed for a learner at the time of this machine’s build. And it had semi-enclosing bodywork – the immediate kiss of death!

It was, however, aimed at the person who wanted clean, everyday transport to get to the factory during the working week, and then out and about for weekends and holidays. 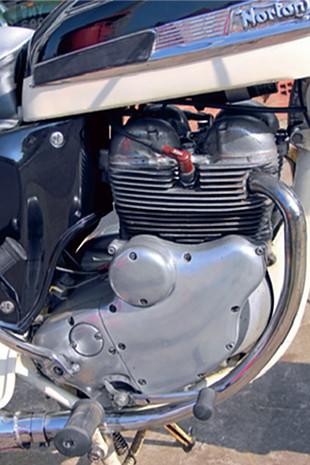 Not only were the Navigator, and smaller sibling the 250cc Jubilee, draped in bodywork, the parallel twins shared an engine configuration that must have looked as strange to 1960s’ eyes as the rotary did over two decades later. The new short-stroke unit engine (63 x 56mm) seemed like it had the top end buried inside the crankcases. Squat iron barrels – one piece, unlike separate items fitted to the 250cc Jubilee – and an alloy head gave it a cobby, workmanlike appearance that the semi-enclosure bodywork did nothing to take away.

Up front, the 350 also gained Norton’s Roadholder forks and a substantial Dominator-type brake, while the frame was still the rather spindly-looking Francis-Barnett type.

This particular Navigator, on sale at Northants Classic Bikes in Rushden, is finished in black and ivory, and very smart it looks too, although a pair of Norton transfers have been affixed to the rear enclosure which rather detract from the otherwise clean lines. But that’s a minor glitch and easily rectified.

The rest of the bike is in fine fettle and is of 1961 vintage, ready and raring to go for this summer’s riding. The Avon tyres are good and with its flat bars it is very comfortable too, something that cannot really be said about the same company’s Wideline models.

It is also lighter than a Domi or similar, something that seems to becoming more important to many riders.

Although the bikes have a patchy reliability record, I was once assured by a very well known Norton expert that they are actually great machines for modern conditions.

NCB’s proprietor Steve Hasler is asking £2995, which bearing in mind you will be buying into one of the most iconic marques ever, really doesn’t seem bad value, especially with that rather distinctive registration! It seems to me a just about perfect bike for club runs and those leisurely rides around the country lanes. I could certainly find room for it, but then I think the bodywork looks rather good.