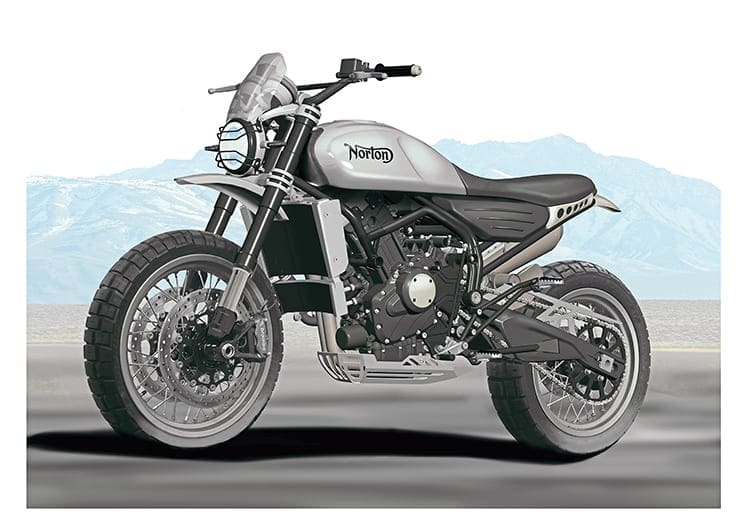 A FAMOUS NORTON name is set to return with their new 650cc scrambler model. The Atlas Scrambler will feature a new 650cc 270° parallel twin, which is believed to be derived from the long-awaited design for a 1200cc V4 superbike. Computer generated images of the new Scrambler were posted on Twitter by CEO Stuart Garner. The 650 will compete in the popular scrambler market currently being fought over by Triumph, Ducati and BMW, among others. A complete bike is expected to appear at this November’s Motorcycle Live event at the NEC. The Atlas Scrambler is the first model of a new Norton range that will use the same basic 650cc engine in different power settings – 70 and 100bhp fuel-injected models and a 170bhp supercharged supersports bike. The images show a pair of front discs in chunky forks and what looks like a cast aluminium swingarm. The design of the engine, with its deep sump and high-mounted gearbox and clutch requires a steep angle for the final drive chain. The price for a basic model will be around £10,000. Norton has also developed a 650cc twin for Chinese manufacturer Zongshen, who have bought the rights to the engine and will sell it under their own name in Asian markets, paying Norton a royalty for each one built. The Atlas name was originally used in the early 1960s for a Featherbed framed 750cc sports tourer. Norton also built a stripped down 750 Atlas Scrambler for the US market.