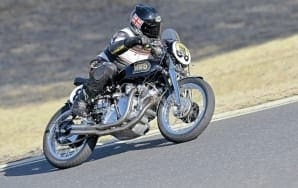 Melbourne-based brothers Ken and Barry Horner are the can-do kids of Australian road racing – whether ancient or modern.

Over the past nine years they’ve amassed an enviable roster of race wins and podiums with the various Irving Vincent 1300cc V-twin racers they’ve created from the ground up in their Hallam, Victoria machine shop, racing against much more powerful Japanese Post-Classic Superbikes, lately equipped with short-fused 180bhp drag race engines.

Then, just to show they could take on the modern twin-cylinder mafia equally well, in 2008 their enlarged 1600cc air-cooled two-valve pushrod V-twin ridden by Craig McMartin rumbled away from a full grid of liquid-cooled, multi-valve race replicas, including Ducati 1198 Superbikes with such famous names as two-time World Superbike champion Doug Polen and AMA Superbike star, Larry Pegram, aboard, to win the world’s premier ProTwins race on the Daytona bankings, on what was the team’s first appearance outside its Australian homeland.