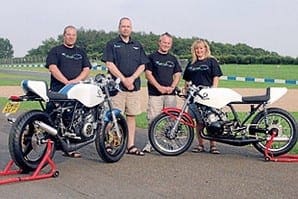 After 30 years in the aerospace industry, Peregrine director Hugh Davies decided to pursue a new direction. “No more management speak, and no more Powerpoint engineering,” he told us. “I’ve had a passion for all things two-wheeled since the age of four, and have ridden, repaired, raced, rebuilt, and restored many machines.”

The frame, closely based on the works original, was created from scratch and incorporates a number of changes to update the geometry and provide a little extra room for road use. The bodywork is based on the later works bike’s profile, but re-worked for a less extreme riding position. The machine can be built with different suspension configurations and all the lighting equipment is quickly detachable to enable the bike to be used on track in classic parades.

Maximum power for the liquid-cooled 392cc motor (which uses parts from the well proven Yamaha Banshee quad bike engine) is a little over 70bhp at 9500rpm at the rear wheel. No power valves, but the 392cc has midrange torque and power too. With a dry weight of just 120kg, it’ll be an exciting ride, whether approaching Devil’s Bridge or Devil’s Elbow!

Such craftsmanship doesn’t come cheap. Around £20,000 depending on spec. But for the well-heeled two-stroke addict, the opportunity to own a brand new exotic machine for less than the price of a new kitchen is worth it. CBG is hoping to test the new bike sometime soon. There’s a disorderly queue forming in the office as I type.