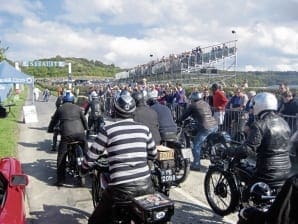 The demise came about 15 years after the first Kop Hill event in 1910, after a bike crashed into the crowd of 3000 spectators, followed by a Brescia Bugatti car, fortunately without serious injuries.

Despite the success of the 1999 revival, it took another 10 years before the current annual revival meetings started in 2009. In 2010, the two-day centenary event exceeded all expectations, with 350 vehicles having a run up the hill watched by more than 8000 spectators, and raising a substantial amount of money for charity into the bargain.

The Kop Hill’s popularity has risen to the point where 150 potential entrants had to be turned away this year, because there wouldn’t have been enough time for them all to ascend the hill.

Read more in this month’s edition of Old Bike Mart