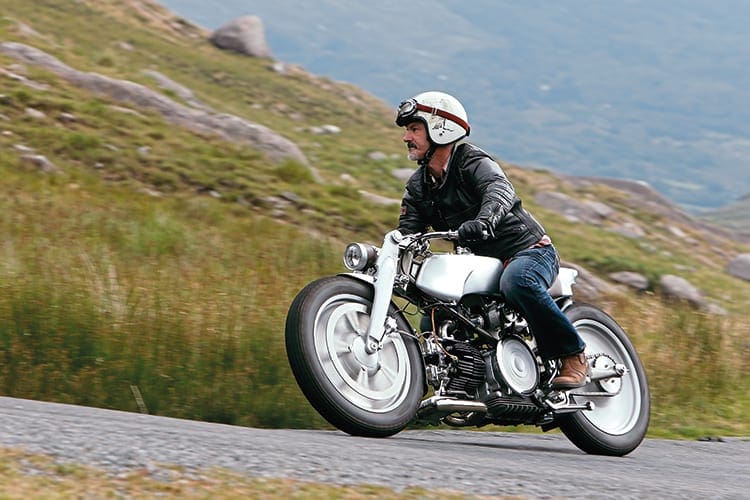 Two Irish friends took on the best custom bike builders in the world and won with a café racer they built in a workshop at the bottom of the garden. And it isn’t just for show…

Don Cronin is on a mission. He’s travelled more than 60 miles from his home near Kinsale, on Ireland’s south coast, to Adrigole, a village on the Beara Peninsular. The 580cc flat single thumps out a deep baritone as he turns off the coast road and heads for the Healy Pass. This is one of the finest biking roads in Ireland, rising 334m as it twists and turns between two of the highest peaks in the Caha mountain range. If any road is going to prove that the Rondine was built to be ridden, then this is it.

With his friend Mick O’Shea, Don had won the 2013 AMD World Championship in Essen, Germany with the café racer-inspired motorcycle they spent two winters building in the workshop at the bottom of the garden. It was the first time that the prestigious custom bike building competition had been held outside the US, and the Irish pair had beaten nearly 600 entries from around Europe and as far afield as Russia, Argentina and America. Not only had they beaten them – but blown them into the weeds. They are too modest to mention it, but I’ll tell you that they scored 728 points, with the nearest rival awarded a mere 432.

After they were crowned best custom bike builders in the world, studio pictures of the Rondine – Italian for Swallow – flew around the internet. Most people who saw them said that it looked stunning, but there were a few comments along the lines of “that’s one way to ruin a good Guzzi”, and “I bet it will never be ridden on the road”. For a man who uses a 1978 T140 Bonnie as his daily ride, keeps a MkIII Guzzi Le Mans for longer trips, and loves hustling his 350cc Morini Sport along the back roads of Ireland, that was an insult. “Sure,” says Don, “we built the Rondine to enter it in the World Championship, but we also built it to ride. It isn’t going to look this pristine for much longer!”

Read more in the June issue of CBG – on sale now!