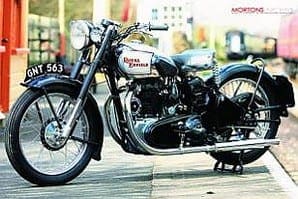 The company was the first to offer what we recognise as conventional swinging arm rear suspension on its production models. And when the very competitive world of one-day trials was supported by the big factories in the early 50s, it was Royal Enfield who swam against the stream of convention and mounted its team on sprung frames.

When the trend to stretch established 500cc parallel twins was triggered by Triumph’s 650cc Thunderbird and then BSA’s A10 Golden Flash, the lads at Redditch went one better and produced the 700cc Meteor. And to prove that the bike could be versatile, they mounted Jack Stocker on one for the International Six Days Trial and he came home with a gold medal for no marks lost. 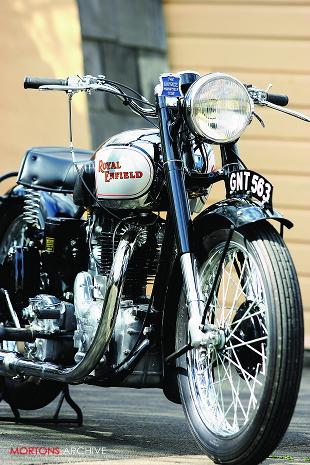 Who offered their full protective fairing as an option on all models from 125 to 700cc? Fairings made to a very high standard in its own glass fibre works? If you guessed Royal Enfield, you’d be right.

The company also catered for the less exotic demand from the masses, with solid singles in fundamental cycle parts. When civilian production got under way as the world began to clear up the mess of the WWII, the range was a 125 two-stroke and the 350 Model G, familiar to dispatch riders who were issued with a Redditch product. For 1946 Royal Enfield promised the 500cc Model J, a bike that first joined the range in the 30s, brought back into production quickly because the basic tooling was available. But now it was fitted with those new fangled telescopic forks, designed by Tony Wilson-Jones with two-way hydraulic damping. A neat touch was the spindle lug forward of the fork leg, which meant the legs could be brought close in to the steering head and at the other extremity the drain plugs were easily accessible. In 1948 there was an alternative 500, the J2 with twin exhaust ports, destined solely for the export market in its early years.

The J2 came with rigid rear frame, and was fitted with a four-speed Albion gearbox with the novelty of an extra lever that the rider could press in any of the upper three gears and find himself in neutral. And you lot at the back of the class can stop smirking at the idea of an Albion gearbox with a special lever to find neutral – that matter of five speeds and 13 neutrals didn’t come until many years later, when the company got brave and offered the first British five-speed box. This was a simple, solid 500 push-rod single, 84mm bore x 90mm stroke making it a short stroke unit by the standards of the day, and a compression ratio of only 5.5 to 1 reflecting the low octane of the pool petrol available in those hard days. 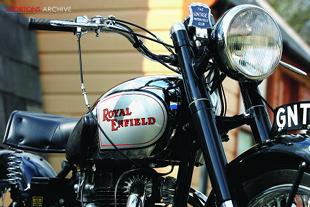 By 1950, the year our test bike was produced, petrol was obviously a little less like cat’s pee and the compression had been bumped up to 5.75 to 1, while its maker claimed a power output of 21bhp at 4750rpm, which is not a lot of revs for that bore/stroke combination. A modest claim, but similar to Norton’s ES2 and behind other 500 touring singles of various makes, with Vincent claiming 28bhp for the Comet. I’ve heard contemporary reports of the power claims at Vincent; let’s just say they were not understated.

You could see where Royal Enfield had focused the J2, with its rigid rear end and optional sidecar gearing available. Priced at £171.45 including Purchase Tax (that’s VAT’s grandad) it was competitive with most, but naturally above the bigger makers like BSA, whose B33 was £165.73 and the AJS Model 18 at £160.02, where the benefits of bulk production affected component prices.

This particular bike belongs to Ron Jennings, a retired builder from Wiltshire and a lifelong enthusiast of the two-wheeled habit: “I’ve never been without a bike since the age of 15.” He found it at Cotswold Classics in Leckhampton (near Cheltenham) in April 2005 and parted with £1750 for a bike described on the invoice as ‘requiring full restoration’.

Ron is best known for his lovely Model 99 Featherbed Norton, recently sold and replaced with a 500cc Model 88; he’s won a lot of prizes with those two, so it was a slight surprise to see him with a Royal Enfield. “I wanted a show bike, it had a nice chrome tank that would look good and it’s a rare model,” he explained. “Lots of people come and talk about it at shows; they had the Model G or the J, but only one had a J2. They’re just delighted to see it and it gets a lot more attention than the Norton.” 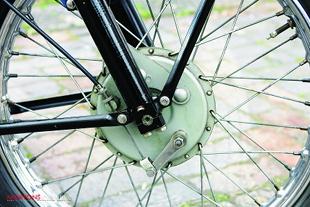 He got it home and gave it a second check over, happy to find that the tank was dent and ding free; off it went to the excellent S&T Plating at Frampton Cotterell, who do have the magic touch with tanks.

The engine out, the top end was stripped and proved to be sound after a check for play and wear; the rings were just cleaned up and refitted. Did he split the bottom end? “Oh no, that’s for the clever fellas,” smiles Ron. The pipes cleaned up, but couldn’t be recovered to show standard, so they are used for riding occasions and a new set from Alan Hitchcock are fitted only for shows. “Very helpful, and he had just about everything I needed – there wasn’t really a problem with parts,” emphasises Ron. “The only parts Alan couldn’t find were a toolbox and the left pillion footrest.” The toolbox came to light at Kempton Park jumble for an affordable 30 quid and the pillion footrest at Shepton Mallet for just two pounds.

That element of urgency in getting the bits together reflects in the time it took Ron to transform the J2 from ‘requiring full restoration’ to earning a highly commended rosette six months later at last October’s Stafford Show. He may be a retired house builder, but as a bike builder he’s still very much ahead of the game. So, how many bikes has Ron given the treatment to? “Oooh, about 10 to 15 to that state,” he estimates. He also has a BMW K1100RS in the garage, transport for him and Iris for European trips; the man lives and breathes motorcycles.

Wheeled out of the Jennings garage, the bike was handed over with the warning: “I haven’t done any miles on it since the job was finished – it’s only been up the road and back.” So this would be a test ride in more than one way, as I tried Royal Enfield’s basic roadster of 55 years ago and the effectiveness of Ron’s handiwork. The valve lifter hardly seems necessary with a compression of only 5.75 to 1, but Ron helpfully fired the bike up with ease and it quickly settled to a steady donker-donk tick over; nice exhaust note – a deep metallic tenor. 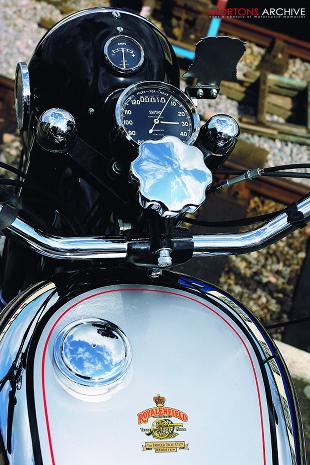 The controls were light and naturally accessible, handlebar levers in the finger line, the clutch easy and smooth. The surprise was the ease with which it flicked through roundabouts, the rigid rear end no handicap to navigation. The brakes are good for 55-year-old stoppers, the front with a definite bite, but bikes of this age need to be ridden with a high degree of caution in modern traffic, leaving a much longer stopping space between you and whatever you’re following.

A pleasant surprise was the big, lazy single’s ability to keep up with the flow, its acceleration belying that modest mechanic specification and power output as it headed out of town for less congested roads. The Albion gearbox, not a make that I have found very easy on previous Enfield rides, was fine; not quick in the twinkletoes fashion of the AMC-Norton British or Suzuki Japanese, but definite in its selection as the long lever moved through its arc from one ratio to the next. It was only out of town that the bike’s impressive in-town acceleration was explained: it was very low geared and felt happiest at 45mph in top; was it fitted with the optional sidecar gearing?

We headed for the Swindon and Cricklade Railway, where Ron had spotted their Moonraker coach, a reminder of the traditional Wiltshire tale of locals trying to rake the moon’s reflection out of the village pond. A fine old traditional tale, its futility honoured in today’s efforts to convince the population of Iraq that Western forces are there to bring peace. Whoops, getting political, let’s move on.

At the railway’s base, Ron asked permission for the J2 to go on the platform and there was no problem, so it was ridden across the level crossing and along the trackside with that deep exhaust note just a shade above tick over and the clutch fully engaged. It was a maintenance day, with no public about, but the crew working on the line and the rolling stock stopped to talk about the bike. It’s the common enthusiasm for traditional transport, in whatever form. 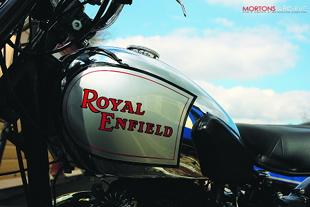 Out on the road again, the J2 impressed with its ability to cover ground at a modest pace without drama, no matter how many bumps and potholes I managed to find; those properly damped tele forks did their job well, and absorbed any harshness on the road surface, while the rigid back followed through and didn’t bounce around or move offline. But remember that this was all at a modest speed, probably the pace you’d use on a weekend club run.

In a long back and forth session for the photographer’s benefit, I did find the clutch beginning to complain and the gearbox baulking when asked to find neutral. D’oh! So many rides on so many bikes with nothing beyond the traditional gear lever made me forget that Royal Enfield provided their riders with that extra lever that took you straight there. If you get used to the idea, it must make life much easier as you ease to a halt and arrive in neutral every time, but my bad memory missed out on that. Damned fool.

For a bike that had only covered a few yards since restoration, this rare Royal Enfield performed very well. Speaking to Ron since my ride, he confirmed that he’d adjusted the clutch and all was well, while neutral comes up as the Enfield Cycle Company said it would in their brochure; he’s also eased off a back brake that was binding slightly.

“I must admit it’s not my favourite bike, not like the Nortons, but now I’ve got it right it is an enjoyable ride,” reported Ron. “And it does sound well – I could hear you following us when you rode it, even when we were stopped, and it was lovely.” I’ll drink to that. 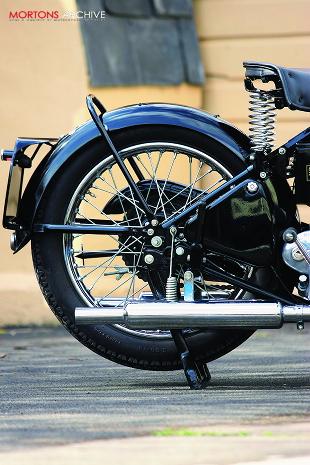 It won another highly commended at a recent Shepton Mallet show, where Ron’s Norton 88 won its class and a cheque for £100. And its presence at shows has not gone unnoticed – the M&C Museum in Matlock has already bought a couple of Ron’s bikes, and knowing his work is keen to have this one as well. “They asked me for a price and when I gave them one, they asked when they could have it,” explained Ron. “But I don’t want to part with it just yet, I want to do a few shows and take it on club runs. Oh, and I had a look in the logbook and it used to have a sidecar, so your guess about the low gearing could be right.”

An intriguing bike. It has that traditional British single feeling that you could sit on it all day long and cruise effortlessly up hill and down dale, when there’s no need to rush and hurry. Built to be enjoyed.