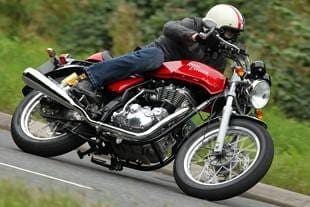 The original Continental GT, one of the first mass-produced 250cc cafe racers, was launched in 1965 and became a huge hit with UK learner riders. This new Continental GT, with similar styling cues as the original, is a sure-handling cafe racer, that will appeal to a much broader market worldwide.

At its heart the Continental GT motor has a tweaked, long stroke, single-cylinder, fuel injected, 535cc unit construction engine that pumps out 29.1bhp and 44Nm of torque.

The new 535cc ‘UCE’, as Enfield call it, has a bore of 87mm and stroke of 90mm and the company claims it to be quicker revving thanks to a lighter flywheel. It also has a remapped ECU to ensure crisper throttle response. Additionally the gearbox features revised ratios to aid brisk acceleration.

The GT also features a new double cradle frame, designed specifically for this machine and Classic Bike Guide’s experienced tester Bruce Wilson said: “This is without doubt, the most refined Enfield I’ve ridden.

“The power is linear though and there’s no jerkiness at all in the fuelling. The engine character overall is quite respectable – I’ve nothing to criticize.

“The exhaust note is lovely. Compared to other Enfields, the 535 has quite a bark to it, though it’s muted enough to avoid cause serious trouble with the locals.

“You can cruise easily at 70mph, so running with normal traffic is well within reach of this bike – something you would not have said of previous Enfields – even the EFI models.

“It’s a big single so you kind of expect it to vibrate. But I was surprised with this bike. The vibes are not anywhere near as bad as I found they were on the earlier EFI models I rode at the start of this year. The gearbox is okay too and the clutch is quite light.

“The suspension feels really soft. You could add some pre-load to the rear but I doubt it if would transform it. But at pace, it’s actually quite comfortable to ride. 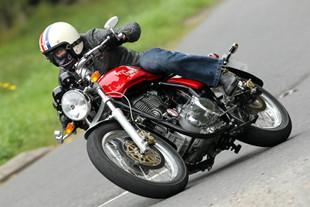 Handling wise it’s really easy to throw around and the bike is dead stable. The bike feels light and agile and really easy to manoeuver. And, despite what I said about the soggy suspension, it sits in the corners really well.

“The front brake has some purchase – to the point where I’ve had the rear skipping about in the air – but then it’s a Brembo caliper, on a floating discs, so you’d expect it to be good!”

“The Continental GT is the first Royal Enfield that I’ve honestly considered to be a real contender in the retro sector. The benchmark W800 Kawasaki utilises contemporary design and build to create a product that’s as pleasing in looks as it is to ride. But until now it’s only had Triumph’s Bonneville and Thruxton as rivals.

But now, in terms of stopping and handling, the Enfield is a whole better bike than the more powerful but heavier, W800. I think Enfield is on to winner with the Continental GT.”

Read the full road test and see the full specs in the October issue of Classic Bike Guide.