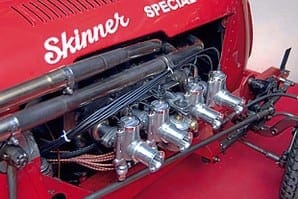 The car was then passed to Carl Skinner, of Skinner’s Union (SU) fame. He built the lightweight alloy body and replaced the Powerplus blower with a Zoller unit before his son Peter blitzed everyone at the important Shelsley Walsh hillclimb. Later in the decade Peter replaced the original Minor engine with a larger Hudson Straight Eight and continued to compete successfully. Post Second World War the car was acquired by Ted Lloyd-Jones before going to ground in the Channel Islands. The Triangle Skinner Special thankfully survived and is currently in the custody of Burlen Fuel Systems Ltd which now owns the SU Carburetter trademark, the car being purchased from VSCC competitor Andrew Harding in May 2011.

It was displayed on the Amal stand at the recent Stafford show, complete with a bank of four brand new GP carburetters. Okay, by rights it should have sported SU carbs, but the GPs were being advertised over the weekend – and it looked fantastic, attracting a great deal of attention.