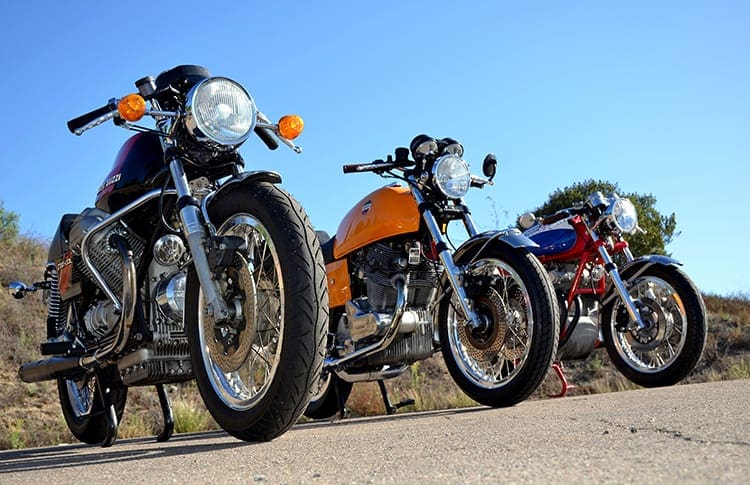 GUZZI’S 750 SPORT V-twins combine the leaping stance of a greyhound with serious mechanical bravado. Their muscular mix has always been extremely attractive on paper, but a ride on one will deepen your perspective.
Thin-waisted, the shaftie drops its seat to under 30in when rocked off the stand, making it easy to sit astride. Two cylinders rise up, one on each side, positioned across the frame – unlike Ducati’s twins, which orient their cylinders lengthways. Twisting the key opens the automatic fuel tap – engage the starter and you’re good to go. Competent for sports or touring, the chassis gives reliable feedback when leaned hard, or when you’re hard on the brakes. It’s a long reach to those adjustable clip-ons at their furthest position, but it all makes sense when the eager V-twin gains momentum. Remarkably tractable, the engine spins smoothly to reach a surprisingly cammy 6000rpm burst.
Its production run began early in the 1970s and stretches some 40-plus years, the 748cc V7 Sport being the first Moto Guzzi to utilise Lino Tonti’s trademark frame. Along with other 650cc and bigger designs from the era, the Sport filled a growing need.
Earlier, in 1965, increased pressure to deliver a faster, more personalised motorcycle found engineer Giulio Carcano and his assistant Umberto Todero at Moto Guzzi confident that their new, all-alloy transverse V7 was the response people were looking for. A lucrative contract with the Italian police force hung in the balance, and few familiar with Guzzi history were surprised when the Mandello firm won. Even so, with exotics like a 500cc V8 racer and rows of pedigreed champions setting the benchmark, the simple pushrod twin seemed a bit underwhelming in comparison. Time would tell.Guzzi’s new signature engine allowed Italy’s oldest motorcycle maker to remain in step with contemporary design, but not for long. The good news/bad news scenario was an exciting new 703cc twin, but no money to build it. State intervention saw the entire staff released (including Carcano) and then selectively re-hired by an investment group formed as the SEIMM.