The autumn Carole Nash Mechanics Show leans more towards later classics, showcasing some of the best vintage Oriental machinery around, but there was plenty to please all tastes with machines dating back to 1906 on display cheek-by-jowl with ton-up Triumph twins, off-road warriors, café racers and stock-as-a-rock restorations from every decade. 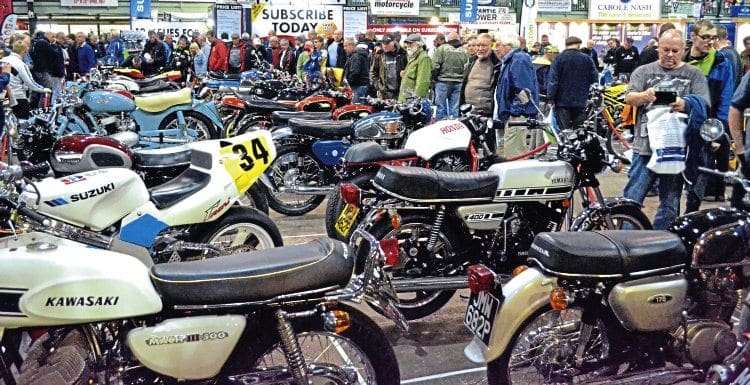 Suzukis stole the spotlight with a special display in a dedicated marquee that featured Barry Sheene’s two world championship-winning RG500s.

Fittingly, the judges decided that the Best In Show award should also go to a Suzi – Heidi Cockerton’s rare 1965 K11T, which took pride of place on the VJMC stand.

Meanwhile, the National Motorcycle Museum was giving away a Norton F1 rotary roadbike in its raffle, and at the Bonhams’ auction a 1924 Croft-Cameron Super Eight sold for £203,100, contributing to a sale total of £1,572,712. The crowds were equally wowed by guests of honour David Aldana and Gene Romero chatting about old battles and re-living their On Any Sunday experiences.