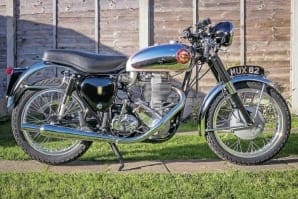 But like a thoroughbred horse, it was highly strung, and could be a pig to get going – so you got two animals for the same price.

Oh, come to think of it, the tickover was an unruly creature too. It is also true to say that BSA had gone as far as it could to get as much power out of this engine, and could see the writing was on the wall as far as big singles were concerned.

Sales were going down and being lost to smoother twins, and as the bike was hand produced, the profit margin was also getting small for the numbers purchased.

Still, testosterone-filled youths who had the readies available were still eager to get their hands on the beast, and it’s the same 50 years later – although those youths are older now.