Motorcycle history has never been kind to the losers and never more so than in the case of Suzuki’s oft reviled RE5. 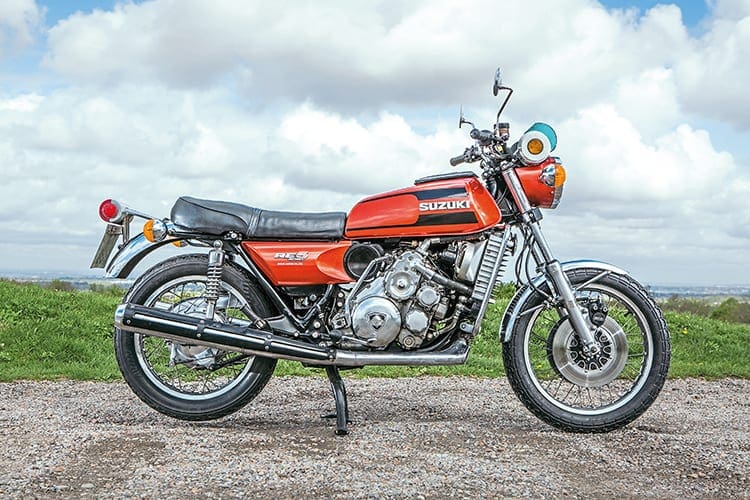 It was met with initial enthusiasm then furrowed brows before being written off as the late-20th century’s largest two-wheeled white elephant. And the 21st century hasn’t been any more charitable to the world’s most populous Wankel-engined motorcycle either. With the advent of the internet, forums and social media have allowed countless keyboard warriors to further sully the bike’s reputation. Those with little or no knowledge have effectively dug the bike’s grave, thrown the keys on the coffin lid, then concreted over the tomb. But was the RE5 really that bad? Read on and judge for yourself.

It really should be mandatory for every motorcycle rider to sample a rotary engined machine. It’s not until you’ve done some miles on one that you can genuinely see why Suzuki’s bosses committed to buying a licence from NSU and Dr Felix Wankel. That delicious surge of creamy power, the apparently unburstable nature of the engine and the unbelievably smooth ride are enough to sucker anyone into signing the deal; well in 1975 at least.

We judge the Suzuki RE5 as a lemon of epic proportions today, assign novelty status to the Hercules (nee DKW) W2000 and brush off the various Norton rotaries as simply good old British eccentricity. Yet back in the 1960s no one really knew where the automotive industry was going. There were precious few computers mulling over theoretical options, two-strokes supposedly still had potential and many reckoned the overhead cam, four pot, four-stroke motor to be the apogee of engine technology. And then along came Herr Wankel with an engine concept that seemed to be the answer to every automotive engineer’s dream…a true rotary engine and not just some wierd multi-piston-engined power unit built in a circle. He had been dreaming of his engine since the dying days of the Second World War and his logic was flawless.

Instead of having pistons that had to be accelerated, decelerated, stopped and re-accelerated why not have something that never stopped moving? Surely this form of quasi-perpetual motion would be more efficient? It seemed to offer something truly unique and from 1958 through to 1973 some 26 major automotive firms supported the concept courtesy of buying licences and/or technology.

Suzuki obtained its licence in November 1970 and immediately invested in a raft of new technologies, ranging from scanning electron-microscopes for advanced metallurgy through to cutting-edge electro-plating for the engine’s combustion chamber. It’s supremely easy now to scoff at the manifest failures of the Wankel engine, but from the late-1960s through to the early-1970s that triangular rotor housed inside the almost oval engine case seemed to promise limitless options. The future was no longer in reciprocating circular pistons, it lay with odd-shaped components describing a contorted figure of eight gyratory dance. For any company with a love and passion of engineering the Wankel engine was a delight. No cams, no valves, no push rods and no reciprocating masses – in all honesty what was there not to like and especially so when applied to a motorcycle?

So why did Suzuki take the plunge when their competitors didn’t? Well, in truth Yamaha fashioned the sharp-looking RZ201 prototype and Kawasaki played with its own – the X99 RCE. Honda supposedly weren’t interested but who can be sure the mighty ‘H’ didn’t just knock a Wankel engine up in one of their secret test facilities? Suzuki’s engineers were both skilled and ambitious. They’d already mastered two strokes via MZ and its top rider cum development engineer and were hungry for more. Suzuki had set its sights on out Honda-ing Honda; this much was clear by the launching of their answer to the seminal CB750 in the guise of the GT750 – Suzuki were aiming high and big here. Through the early-1970s Suzuki’s top brains were working on how to apply Japanese knowhow and dedication to the acknowledged foibles and eccentricities of Dr Wankel’s brainchild. And by 1974 they were confident they’d got it sussed.

There was huge kudos to be had from launching something so technologically different to their rivals and, unquestionably, this must have some impact upon the decision making process. Even in the late-1960s it was evident the Wankel engine was not without its issues. It produced prodigious amounts of heat, could be desperately prone to both rotor tip and side seal wear, yet Suzuki weren’t to be put off. The company even registered patents on some of the technologies it had developed in its strivings to make the concept work. It was still relatively early days for the rotary engine and no one had genuinely comprehended the inherent flaw of Dr Wankel’s combustion chamber.

The long, thin, almost rectangular space promoted backfiring, overheating and smoky exhaust fumes yet, as with any new technology, there would always be teething troubles. Suzuki’s successive trial engines and prototypes had gradually overcome most of the major obstacles, and the company felt they really had something unique and special to offer the world of motorcycling. But why were they so confident of such new technology? Suzuki had been looking at alternatives to the reciprocating piston engine in various guises for almost a decade so although this was ‘all new’ to everyone else it was simply the logical culmination of years of work for the factory.