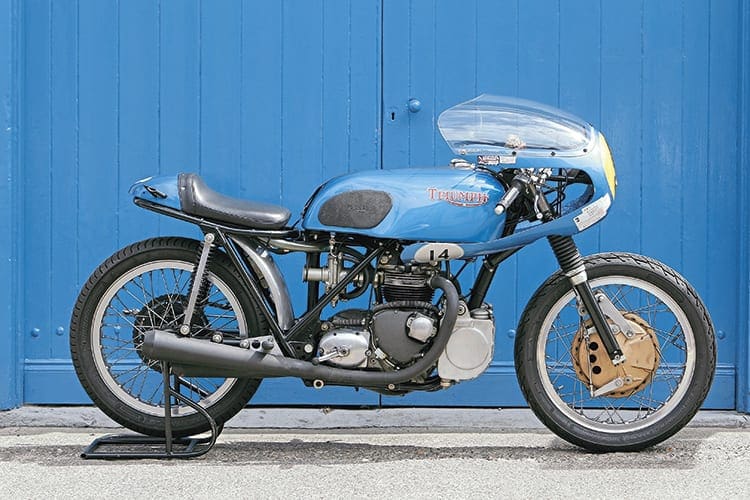 When Percy Tait started work at the Meriden factory the last thing he must have been dreaming of was that one day he’d be riding a Triumph in a World Championship Grand Prix. This is how it happened.

Percy Tait started racing in 1947 on a 350 Triumph. When he proved just how good a rider he was, he then raced on borrowed Gold Stars, KTT Velocettes, Manx Nortons and AJS 7Rs. So when he was conscripted into the army and his sergeant heard about his racing exploits, the young Percy quickly found himself in the squaddie’s dream job – riding with the White Helmets, the Royal Signals Motorcycle Display Team. Jumping Triumph twins through blazing hoops and balancing the full squad on a single motorcycle was the army’s way of showing the public that signing up could mean more than square bashing – for the lucky few.

After Percy was de-mobbed he got a job on the Meriden production line, but his riding skills soon saw him poached by the experimental department as a test rider. And his boss quickly encouraged him to get back into racing at the weekends.

When design engineer Doug Hele left Norton to join Triumph in 1962 (with a brief spell at Ford in between) he was given the job of sorting out the questionable handling of the Bonneville. As chief experimental tester, Percy was the man to put the new unit 650 through its paces and give feedback on the stiffer single-downtube frame and stronger swingarm pivot that Hele designed for the 1963 model. They made a formidable pairing.

Besides riding and racing Bonnies, Tait was also expected to put everything from Tiger Cubs to Tigress scooters through their paces. But one of his favourite motorcycles started life as a Tiger 100.