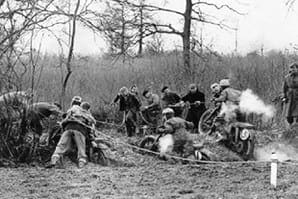 The first televised scramble took place at Beenham, near Reading in December 1954 and, as one might expect with off-road racing at that time of year, the muddy conditions made life extremely difficult and the meeting took place over a shorter course than normally used by the South Reading club.

The BBC had previously successfully televised live speedway and road racing, but the difficulty of covering an off-road event like scrambling had meant it had never previously been tried.

Although the BBC was only transmitting racing live from 2.45pm, and for a total of 45 minutes, its army of staff and equipment was ready to roll at 11am to establish the best camera angles. H R Taylor’s report says, “many more laps were ridden before the 2.45 start, than after it!”

The racing was dominated by Les Archer who won his heat and the final riding a ‘cammy’ Norton. John Draper, on a works Gold Star was second in the final from factory Triumph mounted Johnny Giles. The world’s first newspaper TV critic, L Marsland Gander of the Daily Telegraph, wrote in The Motor Cycle: “Obviously the sport has exciting possibilities but viewers will need to know more about it before they really take it to their hearts.”

Clearly the viewers enjoyed it because after both the Beeb and ITV had flirted with the coverage of scrambles for some years, The BBC Grandstand Trophy, with commentator Murray Walker, became compulsive Saturday viewing, loved by millions, while the series was aired from 1963 until 1970.

*If you wish to know more about the TV scrambles, grab a copy of – On Air! The BBC Grandstand Trophy 1963-1970 – written by Ian Berry and published by Panther Publishing. Published in 2013, Berry’s in-depth work is fabulously illustrated, it offers a comprehensive review, with race results, of the entire series.