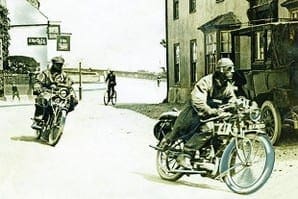 The competitor in question was the passenger in the outfit of a four-cylinder Henderson and said: “From the beginning we were out to win the cup for, without doubt, we had a machine the qualities of which to withstand the shocks and general wear and tear of a long run were legion. Its four-cylinder engine with four-bearing crankshaft would turn over at speed for miles and miles without getting tired or sluggish through deranged components, brought about by vibration.”

The Henderson ran well until Norman Cross when a misfire started due to “too much lubrication sooting up the plugs”. Our intrepid competitor – whose name is never revealed in the text – said: “I hopped out of the comfortable sidecar, selected four new plugs, which were put in deftly by the driver. A dose of violent revving was then administered to the engine without anything happening.”

After checking the magneto it was finally discovered that the rocking arm in the contact breaker had seized. It took 40 minutes to effect repairs and our competitors were unable to make up sufficient time and left Grantham without breakfasting. The rest of the journey was made without problems – in fact our competitor said it was, “monotonous, for the weather was dull and cloudy, though a breakfast stop in York put a little life back into us”.

At Carlisle it seems many were complaining about eye problems, brought on by ill-fitting goggles and the driving rain. “The rain and drizzle during the night chapped our faces, which smarted unmercifully in the broiling sun at lunchtime – and cosmetics were in great request.”

The scenery on the last portion of the run to Edinburgh, we’re told, was magnificent and the city, “is truly a most appropriate spot in which to end a tour of such magnitude”.

The return journey was uneventful, so far as our heroes were concerned, until reaching Hatfield, “when a cycle car coming in the opposite direction, cut us so closely that the driver of the Henderson received a severe blow on his right hand, but succeeded in steering the machine safely.

“In due course Barnett was reached and after signing the time sheet, we drove into the yard of the Salisbury Hotel to enjoy a well-earned meal and rest.”

• More images in the June issue of Classic Bike Guide. You can purchase classic images from the Mortons Archive