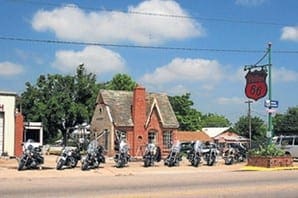 The Motor Cycle expressed disappointment, claiming there to be some 100 different manufacturers in Japan at that time, but offered some hope for the country’s two wheel industry, suggesting, “combined with the steady increase in popularity of motor cycling and the interest aroused by the show, a solid foundation has been laid for future exhibitions and a greater interest in motorcycles.”

In 1954 there were very limited imports of motorcycles into Japan, as few as 100 units per year and were, “useful as a guide to the Japanese manufacturers in modern trends and design overseas. United States models are few, partly because of their high price but also because the British bikes have spring frames and are thus preferred.”

Not surprising then that there were no foreign manufacturers at the show – quite a contrast to prewar times when imported bikes dominated the Japanese market.

Of the three bikes chosen to illustrate the show report, two came from Rikuo, one being a 750cc V-twin that resembled a flathead American machine, complete with bulky ‘fenders’, and the other a shaft-drive, 350cc model that looked distinctly BMW in origin. The other was from Asahi, which was described as an “orthodox-looking 250 with a three-speed gearbox”.

It was the scooter market that was really beginning to boom, with women the prime users, “something that would has astonished prewar Japan,” suggested The Motor Cycle. Registrations jumped from 70,000 in 1951, to 144,118 in 1952, to a spectacular 306,981 in 1953 and bore names like; Fuji, Lilac, Pearl, Showa, Dream, Portly, Robin, and Pony Monarch. The Motor Cycle suggested the rise in scooter sales could also have been due to a popular industrial trend, in which they were used as conveyors of freight with several manufacturers building three-wheel trucks (based on scooters), considered to be a cheap and popular form of delivery transport in the country.

• Images like this are available to purchase from the Mortons Archive