Bigger than the 380, smaller than the 750; Suzuki built stroker triples for everyone

High revving, whim-whim two-strokes (that’s my version of their noise by the way) were the sound of the Seventies. I know because I had one, and so did several of my mates. Yes they were smoky, but there was no talk of degradation of the planet then; that was for the next decade. 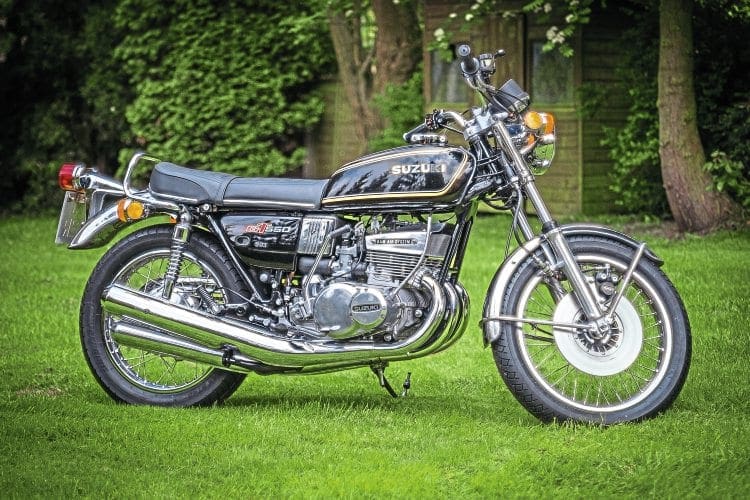 The build quality – see the tail light for instance – and handling were never the best, while the literal Japanese to English manuals were hilarious and impossible to understand, but boy were those bikes quick, and that’s why we loved them.

Paul Waterfield never lost his love for the type, and now he owns about a dozen of the beasts, from mid-range to big Suzukis and Kawasakis. One or two of them required a lot of work and effort to restore the good looks; hence the GT550 for today.

The GT550 Suzuki came out in 1972 as a competitor to the Kawasaki H1 Mach 3. It is a three cylinder, air-cooled two-stroke engine, but featuring some advancements in oil usage over earlier smoky two-strokes, plus a new air cooling system.

It cost £825 when new and developed over a six year period from the J model, with such yearly changes as removal of the rubber fork gaiters, disc brakes instead of drum, different exhausts and a few minor styling changes. In essence it was the middle brother to the larger GT750, or the ‘Kettle’ as we called it, and its small brother the GT380. For some reason – possibly styling – it was outsold by both smaller and larger bikes. It was fitted with both kick and electric start, but not electronic ignition.

Colour range was exotic, not like those dull colours of the Sixties. The GT colour swatch kicked off with such glorious names as Aztec Gold, Redondo Blue, followed by Larado Red and Hawaii Green for the L model, while the final B models of 77 were Uranus blue and spark silver.