Unless you’ve lived live in a cave somewhere for years, you’ll know that this is the 50th Anniversary Year of Triumph’s Bonneville. It’s arguably the world’s most iconic motorcycle, a machine that’s been feeding dreams of riders from the late 50s Rockers to today’s reborn types who remember the name from their youth.

If you want a measure of just how iconic, consider that when Triumph was reborn in 1990, there were only three of the old Meriden personnel employed at Hinckley. Tester Jock Copland was one, and the old hands didn’t talk to anyone about what was happening. One Meriden veteran I know was quite offended when he recognised Jock taking a mysterious machine into an anonymous building in Coventry, and though he had seen my friend, firmly closed the door and preserved the secret. ‘Talk and you walk’ was the clear instruction at what some said was Triumph’s new research base. Nobody talked. 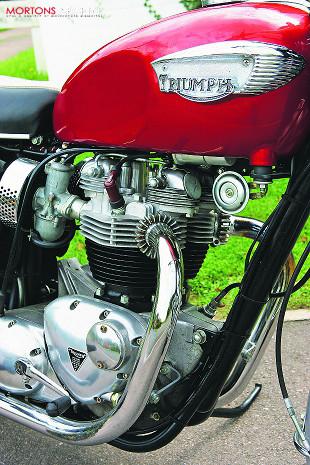 The only nod to heritage in the new range was the model names: Trophy, Daytona and later Trident. The putative Classic Bike Guide had a 1200cc Trophy for a few days and its performance reached a level few riders of older bikes could comprehend; the few seconds from a second gear roundabout exit to an indicated 100mph were in a different dimension. Triumph was a thoroughly modern motorcycle aimed at the future.

Study the catalogues the young company has produced each year and you’ll see a gradual acknowledgement of its history. Quite right too, because Triumph has a record of getting it right in hard times, when other makers are wringing their hands, wondering how to survive. What’s more, they were brave enough to introduce a parallel twin in recent years, so the Bonneville remains an attainable icon. Look at prices of the 1950s and early 60s models and you’ll see a steady rise that confirms the Meriden product is the one attracting clever money; I spoke to a man recently who’d just rebuilt a 1968 T120 and was taking it to the Gaydon Anniversary bash to offer it for sale. He’d been advised to ask £18,000. I don’t know if he sold it, but offer it up as evidence of the Bonnie’s standing.

However, here’s a chance to own a pretty smart specimen for a mere one pound Sterling. I don’t think they’ve ever been that cheap on the open market at the very worst of times. Don’t think that there’s any guarantee that you’ll get this bike if you do lay out a quid or few, but you will have a chance as it’s the star prize in this year’s VMCC raffle and the single quid is what a ticket costs. 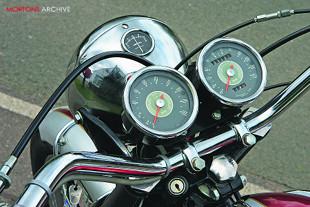 As we were caught up in the Bonnie’s Birthday Bash, I asked if I could have a ride on this very smart example of the US spec 1968 T120R, with its high bars and teeny fuel tank. Don’t be misled by that R suffix, you non-Triumph buffs, it simply stands for Road – though clearly not the model to load up and undertake long hours at motorway speeds, it is, nevertheless great fun on the back roads.

James Hewing, VMCC CEO, explained that the bike was at Brian Slack’s place, the man they call on to give raffle bikes a look over, as headquarters was undergoing building work.

Brian was a structural engineer and his motorcycle engineering is a blend of self taught and acquired. His dad was into bikes and his wife Ann worked at Ingell’s of Derby, BSA main agents. He’s also worked as spanner man to the likes of Ron Haslam and Charlie Williams and pride of place in Chez Slack goes to a lovely colour drawing of Charlie Williams en route to TT victory on a Yamaha Brian built for him. 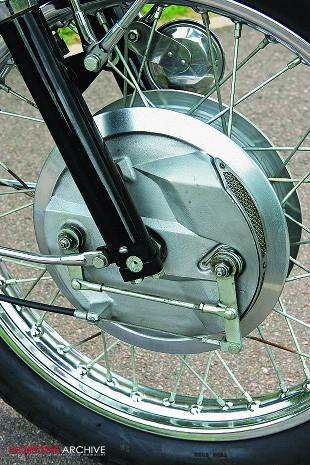 “Try the clutch on my Beesa,” he suggested, pointing to his A10. I have arthritis developing in my fingers, but I could lift the clutch with one finger. Impressive. He does prototype work for some big names and is currently working on an update of the BSA clutch. Asked by a club member why his oil pumps always worked, he pointed to the rig he’s built to lap them in, using a  mix of diesel and T-Cut; that didn’t come out of a factory manual.

He apologised, as the Bonneville had only come in recently, giving him time to check the basics, but a bruised right foot, courtesy of a dropped engine, meant he couldn’t start it up and check it properly, but come time to start it, a quick tickle of both carbs and a swinging kick had it fire up straight away. Those silencers may look effective, but the bike certainly has an impressive exhaust note and errant Volvo drivers should be able to hear you coming 100 yards away.

The clutch didn’t feel right. Brian had warned of a mysterious knocking sound as it cleared, but had only had time to check and oil the cable. It went into gear with a lot more than the characteristic Triumph clonk, more of a kerrrrlonk as the dogs engaged. This was a bike that would clearly be better if a knowledgeable man like Brian had been able to ride it around the block and do some basic sorting out. It spluttered when the throttle was opened too, its twin carbs clearly out of synch. Oh dear, it was going to be one of those days when a pretty bike got temperamental and played up, rather like the runner-up in a Miss World competition on the way to a press conference.

However, by then Brian was in snapper Wilko’s car and en route to some photogenic setting, so off the Bonneville went in pursuit, needing a fair old fistful of throttle to get away cleanly. I caught up in traffic, but unless I had the bike in second gear approaching a stop and could just nudge it into neutral while still on the move, the clutch wouldn’t clear enough to allow selection of neutral at a standstill, and when I was caught out at traffic lights and had to pull the lever in and keep the bike in first gear, the clutch began to drag. 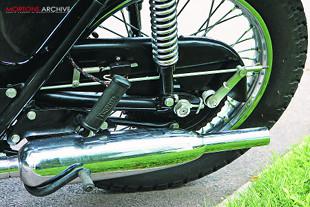 Please don’t read too much into what is an honest account of the bike. It wasn’t a dog tarted up to impress, but it did need the careful little touches that can transform a traditional British motorcycle from a right pain into a real pleasure. It’s only slight adjustments that are needed, but you need a man with mechanical knowledge to do those tweaks.

This Bonneville needed to get to about 3000rpm to operate smoothly, and once out in winding country roads it delivered:crisp acceleration, slick gearchanges and sure footed handling through unknown bends. The front brake is the BSA-Triumph Group’s eight-inch tls unit that was the standard to which others aspired in the late 60s; please don’t write in and ask about the disc brakes available around the time of this bike’s birth; few more effective cures for constipation than early motorcycle discs have been found.

This not quite bonny Bonnie loves open roads where its medium speed cruising ability shines through. It’s geared to give about 17ish mph for every 1000rpm in top, so 4000 will give a speed nudging 70mph. At that engine speed it’s smooth and relaxed, however I wouldn’t want to push it much higher with those high, wide handlebars – the windblast would be considerable, but down a country lane those big bars combine with the slim fuel tank to make this a supremely flickable bike; Remember Kawasaki’s adverts that told the world that their whatever model was more flickable than a bogey. Whoever heard of anyone this side of Samson trying to flick, or even lift a set of wheels from one of Sir Nigel Gresley’s Pacifics or some lesser locomotive? 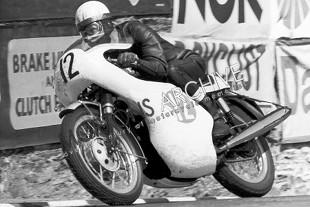 It’s a very handsome machine, this Bonnie, a reminder of Triumph Meriden’s good eye for colours in its combination of silver and a metallic red. It was a first-kick starter from initial acquaintance and when I got it out in the country I found I didn’t need the troubled clutch for upward changes.

I understood, from a good factory source, that the four-speed box with its many fine pitch engagement dogs could not be persuaded to change without using the clutch, but this one did it effortlessly.

Back at VMCC's HQ, James Hewing assured me that the clutch centre was at fault and that a replacement was on order. Good; it certainly needs it and whoever wins this Bonnie, once sorted, should have a jolly good motorcycle.

• Classic images can be purchased from the Mortons Archive