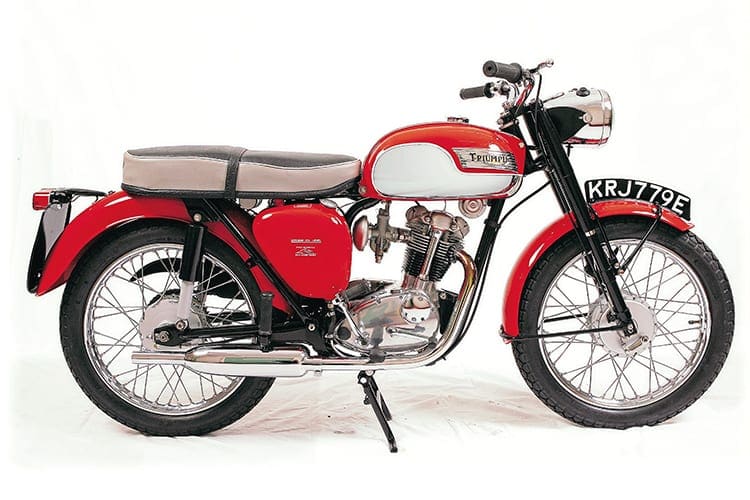 Edward Turner was a master of marketing as much as he was a genius of a designer and when he decided he was going to blow the BSA Bantam and Villiers-engined two-stroke offerings into the weeds, the result was the Tiger Cub. Stylish enough to mix it with its bigger brothers and sisters at the café and the chip shop, this little 70mph 200cc single would also manage to do more than 90mpg if ridden carefully – an important consideration when petrol was four shillings a gallon and you were lucky if you were paid more than £4 a week.

Even before the advent of the 250cc learner law, the option of a stylish 200 single on the never-never rather than a rotting ex-WD single was an attractive one. When that 250cc restriction came along in 1960, the Tiger Cub was well-placed to exploit it. The Tiger Cub started life as the Terrier T15 150, which was launched at the Earls Court Show in November 1952. The Terrier was fitted with a unit construction engine and Triumph’s first sprung frame with diminutive and basic plunger shocks. It had trademark Triumph features, including the headlamp nacelle and four stripe tank badges. Testers loved it, with US magazine Motorcyclist raving about the indicated 70mph top speed and fuel-sipping engine.

In 1954 the Terrier was joined by the T20 Tiger Cub with a 199cc engine, the increased capacity achieved by increasing both bore and stroke to 63 x 64mm compared to the Terrier’s 57 x 58.5mm. The integral gearbox had the same ratios, but a larger gearbox sprocket and the first Cubs had a bigger Amal carb. This was replaced later with a sometimes highly unsatisfactory Zenith and after Triumph realised how poor it was, they reverted to Amal products. The Cub had 19in wheels, later reduced to 16in on the base models, which were equipped with 5.5in cast iron drum brakes, which were adequate. The Cub used grease-packed telescopic forks and rear plungers, a slim and flexible frame and a multi-plate clutch to take drive from the four-speed box. The Cub or Terrier buyer had the option of an upswept exhaust system, as the diminutive lightweight was already making waves on the Trials scene.

Edward Turner’s desire to make everything light and cheap led to the less-than-stiff frame design, in which there was no upper brace to the headstock that was connected to the frame with a single ‘swan-neck’ tube at the base. To make things stiff enough, the petrol tank became an integral part of the design, with the internally braced tank bolting to the frame in an attempt to provide enough strength. On a small bike like the Cub this was partly successful, though it didn’t transfer quite so well when the principle was used on the Triumph 350cc twins.

The built-up crankshaft used a drive-side ball bearing with a plain bush on the timing side and started out with a roller bearing connecting rod big end, which changed to a plain bearing in 1956 with mixed results. Primary drive to the wet multi-plate clutch was by a single row chain to start with. An alternator powered the six-volt electrical system, with the ignition points mounted in a housing on top of the timing cover. This housing is often wrongly referred to as a distributor even though it only had one spark to distribute – it was simply a points housing. Later the points were moved behind a plate on the timing cover and in 1957 the Cub acquired a modern swingarm frame.

The Tiger Cub was a hit on both sides of the Atlantic and competitively priced. In the UK it cost £127, while the US price was $449. When the exchange rate was around 2.5:1, this shows how much those dollar sales contributed to Triumph’s profits. It looked and felt like a proper motorcycle, with a solid four-stroke thump from the exhaust and lively performance.

From 1961 the engine got a better oil pump and the Cub received another new bottom end in 1962, which solved some of the problems with the crankshaft bearings. The primary chain had no adjuster, and sometimes broke if the case was allowed to run dry of oil. On the early one-piece crankshaft engines, the crankcases had to be split to change the rear drive sprocket. Even so the engine was such an innovative design that Triumph’s in-house rivals BSA took it, straightened up the cylinder, beefed up the bottom end and created the C15 250 and B40 350 singles. Eventually, the tiny 150cc Terrier’s descendants included the mighty BSA B50 and CCM competition 500cc singles.

Early Sixties models were not immune from the era’s obsession with enclosures, and while the Cub didn’t get bathtub rear ends, the T20 roadster models from 1959 onwards were fitted with what became known as the ‘bikini’ enclosure behind the engine and under the seat. The punchy little single lent itself to performance mods for the road and was popular with off-road riders, and Triumph responded with a number of models. The T20C was produced for the sporting rider from 1957-1959, with larger wheels, greater mudguard clearance, lowered overall gearing and an upswept pipe. The Trials Cub became a huge success, with the field at many a weekend competition packed with tiny Triumphs. The Cub remains a stalwart of pre-65 trials competition. The various Triumph Sports Cub models, objects of desire in the showrooms for many a young rider, had 14.5bhp, up 4.5bhp on the base models, giving top speeds of nearly 80mph.

Pressure from US dealers worried about the impact of the latest Japanese off-roaders saw the launch of the 1964 T20M Mountain Cub with Dunlop Trials tires, aluminium mudguards and 7.5in of ground clearance. These were often painted bright colours so that riders in the Rockies didn’t get mistaken for targets by hunters. Although it was heavier than its Asian competitors, the Mountain Cub scored on comfort and hill climbing ability, pulling strongly when the smaller Japanese bikes ran out of steam. Triumph had been owned by BSA since 1951 and for some time the two companies shared components across their models to reduce costs. In the mid-Sixties, after Edward Turner, who had conceived the original Terrier as a rival for the Bantam, had retired from Triumph, a hybrid BSA Bantam and Triumph Tiger Cub was created to further improve efficiencies and reduce costs.