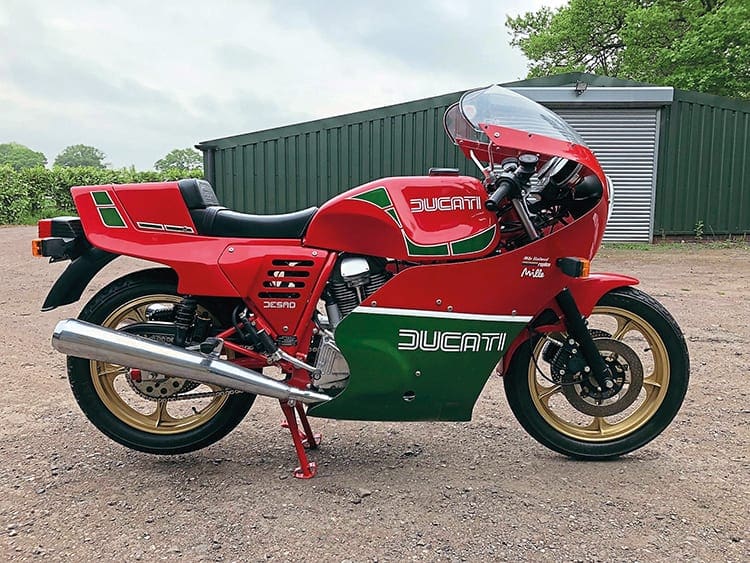 A 1985 DUCATI Hailwood Replica MHR Mille with just three ‘push’ miles on the clock, unregistered and unused, will go under the hammer later this month.

It is estimated that it will sell for around £30,000 at the H&H Motorcycle National Motorcycle Museum sale on July 26. Motorcycle legend Mike Hailwood won the Isle of Man TT 14 times in total, mainly with Honda. At the end of 1968 Honda pulled out of motorcycle racing and Hailwood rode privately entered Hondas, a Seeley and for the BSA Rocket 3 factory team at Daytona, as well as in Formula One. He returned to the TT aged 38 in 1978 riding a Sports Motorcycles prepared Ducati 900SS and against, everyone’s expectations, he won. In recognition of his astonishing achievement Ducati produced a Hailwood Replica in 1979. Mark Bryan, head of motorcycle sales at H&H Classics, said: “This Ducati Hailwood Replica is a ‘brand new’ 1985 bike, so whoever secures it at our sale is getting the last of its kind, and also a bike that is the stuff of legend. It doesn’t get much better than that.” Under the fairing it was essentially a 900SS. But it was styled just like Hailwood’s racebike and treated to a few notable upgrades like Brembo brakes and Conti silencers.

By 1984 it had evolved, with a new 973cc motor making 76hp, thanks to a bigger bore, bigger valves and a redesigned crankshaft. Now called the MHR Mille, it also features an electric start, a redesigned instrument panel, folding footpegs with rubber inserts, adjustable Verlicchi clip-ons and a hydraulically actuated clutch. Some 7000 Mike Hailwood Replicas were made up to 1985, but only about 1100 of these were Milles. They were the last bevel-drive twins that Ducati produced.