The LE might have been for humdrum duties, but it came from the maker of one of the finest racing machines ever – the long-lived Velocette KTT

Few models have achieved such a long-running level of competitiveness as Velocette’s famous KTT, a motorcycle with a competition career which started in the 1920s and lasted well into the 1950s and beyond.

The 348cc KTT’s success stemmed from its engine; it was way ahead of its time. The first overhead camshaft Velocette engine, in the Model K, was designed by Percy Goodman, of the Veloce-founding Goodman family, in 1923, though it was 1925 before it made it to production. The first models had ‘Veloce’ on the petrol tank but soon this changed to Velocette, as that was the name now recognised by enthusiasts around the world. Prior to the Model K, Veloce had been largely the builder of two-strokes: top-quality machines nonetheless, but the first four-stroke (since the company’s fledgling years) did mark somewhat of a departure. 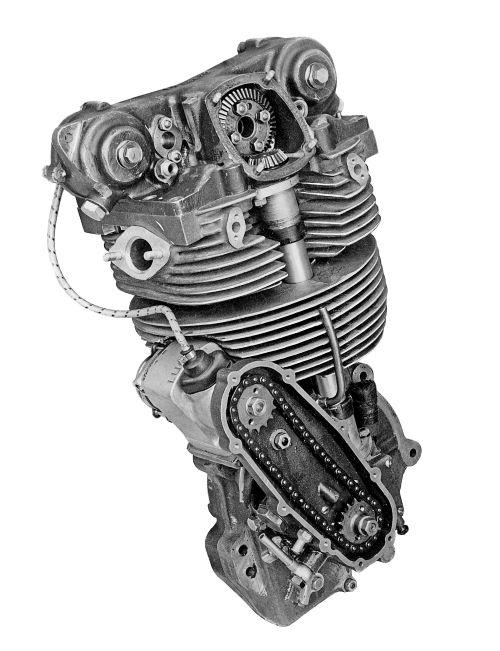 However, it was immediately clear that the firm was onto a winner – quite literally, for in 1926 Alec Bennett raced his Model K to victory (incidentally, a 1925 TT attempt ended in disappointment, with all three works mounts retiring) and so set in motion a long chain of racing successes for the Mark I ‘Cammy’ and its derivatives. Other notable wins included TT successes in 1928 (Bennett again) and 1929 (Freddie Hicks).

While the racing led to the KTT (Kamshaft Tourist Trophy – remember, the Goodmans/Guttermans were of German descent), the Model K was joined by the KSS (for Super Sports) as early as September 1925, though its role as a ‘racer’ was taken over and it became a fast roadster.

The first production KTT was sold in September 1928, with the Mark I continuing through to mid-1930. They were a hit of huge magnitude, being fast, light and, essentially, tough. Specification didn’t differ greatly to the KSS, though there were some crucial alterations: strengthening ribs/webs were cast into the crankcase, the revolutionary Harold Willis development engineer-designed positive stop gear change mechanism was fitted and extra bracing on the Webb front forks, running from lower fork link brackets to the front wheel hub. Internal engine modifications included improved oiling, a reshaped combustion chamber, high compression piston, double roller big end, larger gudgeon pin and a smaller exhaust valve. It was a racer, pure and simple, capable of upwards of 85mph ‘straight from the crate’ and 100mph on alcohol fuel.

Its potency was demonstrated many times. For example, at the 1929 TT ‘proper’ and Amateur events, five KTTs were in the top seven for both races, while in the 1929 Amateur (forerunner to the Manx GP) 500cc Senior race, Harold Levings came second on his 350cc KTT. In the 1930 Junior Manx GP, the model’s superiority was underlined, with Doug Pirie heading home eight Mark I KTTs.

The 1931 season KTTs were called Mark IIs, but mainly retrospectively, and there was very little appreciable difference between them and the Mark I. Models for 1932 were Mark IIIs, with only 32 made (the final 14 with four-speed gearboxes), among their alterations being a thicker flange at the cylinder barrel base and a longer neck to the oil filler to prevent frothing. For 1933 there was the Mark IV, officially announced as such (the Mark II and III had not been ‘official’). Main changes included 14mm plug, hairpin valve springs (made under licence from Rudge), and then, from December 1934, being bestowed with an aluminium bronze cylinder head. There were two seasons of Mark IVs, with the final 50 benefitting from the bronze head.

By now, the works racing team was racing machines that were becoming further and further away from the ‘production’ KTT, with different cylinder heads and such on the factory’s own models, as well as 500cc options, which were never offered for sale.

The first Mark V was made in October 1934 – the second and first production one in April 1935. There were 70 Mark Vs, each with the frame derived from the work racer and bronze cylinder head. Engines were similar to the Mark IV but with oiling improvements.

Mark VI KTT is something of an anomaly in that it was an ‘official’ works machine, never to make it to production. It is a fascinating creation, though, because it marked the collaboration (collision…) between ‘guru’ Willis and star rider Stanley Woods. Willis came up with the engine, a modified Mark II KSS head (with enclosed valvegear) grafted onto a Mark V bottom end, while the frame was Woods’ influence, with the engine moved forward; Willis always wanted the engine further back, and Stanley disagreed… Only four or five were made, while the original experiment, ‘Little rough ‘un’ was used by Austin Munks to win the 1936 Manx GP. 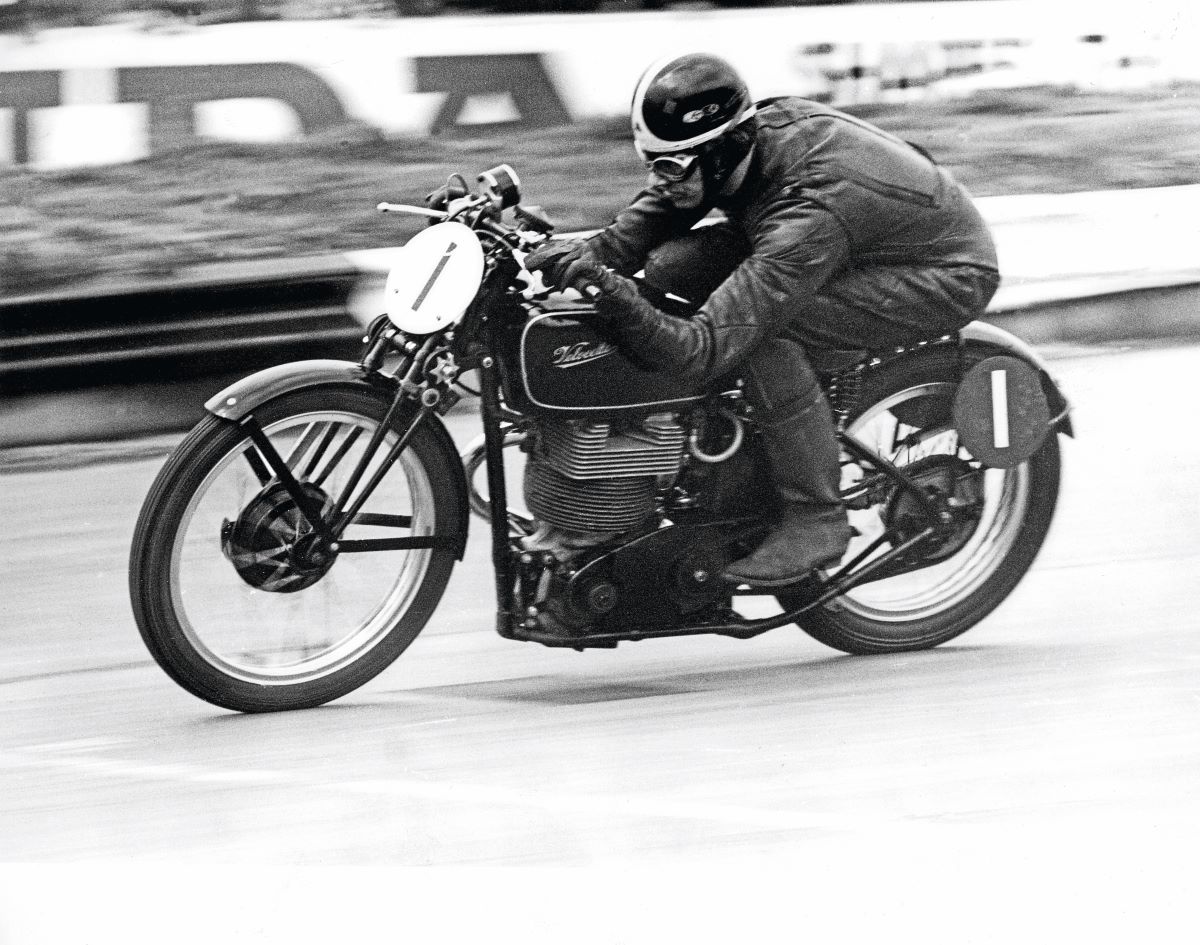 By the end of 1935, there was now a significant break in KTT production. Meanwhile, the works team got on racing, with double overhead cam engines and swinging arm frames being used. Yet racing success didn’t benefit from these advancements. When the Mark VII came in March ’38, despite its conventional rigid frame and single cam engine, it was otherwise state-of-the-art beauty, once again capable of giving privateers a machine with a real fighting chance. However, demand wasn’t necessarily as expected; just 37 were delivered. Did the buying public have a suspicion of what would come next?

If they did, then surely the Mark VIII wouldn’t have disappointed. Probably the first ‘modern’ production racer, it was essentially (at a glance, anyway) the machine campaigned by the works for the last couple of years and was available to specially chosen campaigners.

There were a few detail differences to the works model campaigned by Stanley Woods et al (among them the engine finning was 9in; the works model was 10in for cooling), but essentially it was the real deal.

Fifty engines had been made before war interrupted proceedings, while the 1939 TT races had truly showcased the model’s exceptional nature. A whole host were entered, with several in the Senior, too. The models attracted lots of attention, with the press photographers capturing many images of the speeding machines. Meanwhile, Stanley Woods got on with the winning on a works version. Around 50 Mark VIIIs were made by December 1939.

Post-Second World War and production restarted in 1947, while sales were given extra boosts by the successes of Bob Foster and Freddie Frith, with Foster winning the 1947 Junior TT and Frith the 1948 Junior TT, while Grimsby man Frith became the inaugural 350cc world champion in 1949, with ‘Fearless’ Foster retaining the title for Velocette in 1950. In 1949, Frith rode the ‘double knocker’ (double overhead cam) version for many (but not all) races. Alternating when it suited with a special ‘big head’ single overhead cam model – which apparently gave more torque, Frith won every GP, including the TT.

Foster’s efforts in 1950 were particularly praiseworthy, considering that by now the Velocette was becoming seriously outdated, with Norton launching its Featherbed-framed Manx that year. By 1951, the Velos were no longer in the winner’s circle.

During the 1950s, KTTs continued to be campaigned, while there were a number of ‘specials’ based upon them, with engines finding their way into lighter, more modern frames. Chief among these were the efforts of Doug Beasley, whose 250s (achieved by sleeving down the 350) gave privateers a competitive quarter litre mount.

Later, there was a special Reynolds-framed 350, instigated by no less a man than Geoff Duke and constructed by Reynolds, while stalwarts – such as the famous Arthur Lavington – continued to campaign their KTTs into the 1960s.

By the end of that decade, with vintage racing having taken off, the KTTs had a new sphere of competition, and, headed by uber enthusiast Ivan Rhodes, set about winning all over again.

More latterly, Ian Cramp’s super-developed Mark I KTT remains one of the fastest ‘vintage’ machines in the world.