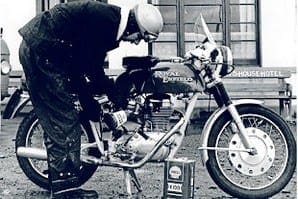 The company recently announced it was ceasing to distribute Royal Enfield Motorcycles in the UK in order to concentrate on ‘other activities’, including the production of sidecars and luggage trailers. But sales director Ben Matthews told Classic Bike Guide: “We’re doubling the size of our showroom to accommodate more sidecars but also to promote our new business as Royal Enfield specialists.”

Matthews said the new business will be known as ‘The Watsonian Motorcycle Company’ and will deal primarily with Royal Enfield singles from the mid-1990s to date.

“We have a massive stock of 350 and 500cc spares – over a quarter of a million pounds-worth – and there’s a really good market in second-hand Bullets,” he said. “We’re also going to build specials. There’s lots of potential for that side of the business.”

But if there is a good Enfield business to be had, why sever the links with the factory in India?

It was a succinct press release announcing that Watsonian would be ending a 14-year stint as the UK Royal Enfield importer.

It read: “Watsonian Squire are ceasing the distribution of Royal Enfield motorcycles in the UK in order to concentrate on other activities… the historic British sidecar manufacturer, which celebrated its centenary last year, has imported Royal Enfield into the UK since 1999 and during those 14 years has sold thousands of motorcycles.”

“When the EFI came along at £5000 the customer expectation grew faster than the quality improved.”

Allied to bike price/customer expectation issue, the warranty scheme operated by Enfield owner in India, Eicher Motors, meant that the business model was no longer sustainable.

Watsonian tried to explain its difficulties to Eicher but with no solution forthcoming, the British importer, according to Matthews, had little option than to pull the plug.

“It’s a shame because everyone in the company here is totally committed to the product. That’s why we’ve made a decision to become an independent Royal Enfield specialist. With this new direction it means we are firmly in control of our own future.”