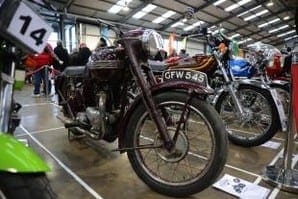 Kawasaki Z1000 (1979)
Bought from the Classic Bike Shows Stafford event some five years ago, current owner Des Price has nurtured this wonderful machine back to health. After "sorting out the many cock-ups and removing a totally worn out engine", Des has lovingly restored this machine to its former glory singlehandedly. Every nut and bolt, every lick of paint has been completed by himself.

Triumph Speedtwin (1949)
Before current owner Julie Price purchased her beloved Triumph back in 2001, it had been owned by just one careful owner. Still used daily until the mid-1980s, the Speedtwin boasts a near-complete set of genuine parts with only the rear light and exhaust being unorigional parts.

-A8 (1976)
With a restoration taking just one year, this Kawasaki has been returned to its former glory by current owner Alan Cooper using 99% o.e.m. parts.

Ducati MHR 900 (1979)
Garry Kendrick's Ducati proudly won first prize in the Private Entry display here at Newark this January… and what a deserved winner he is!

We've also managed to sneak a peek behind the scenes of a Classic Bike Guide photoshoot with guest of honour Roger Marshall's bike. Check out this super speedy video (below) of the route it took from the main stage to the shoot itself…