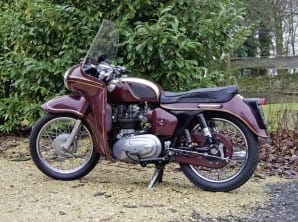 WHEN ROYAL ENFIELD launched the Constellation in 1958, it unequivocally aimed its new 692cc superstar – the biggest parallel twin on the market – at the performance end of that market.

The Connie’s cosmetics were liberally sprinkled with stardust, from the shimmering chrome on the petrol tank and cut-down mudguards, to the sports-style flat bars, siamese pipes and minimal chainguard. Superficially, the Constellation had come a very long way from its Meteor origins.

Enfield’s mammoths were all built at Bradford on Avon rather than Redditch, and the first of the big beasts was trumpeted in 1953.

But while its capacity sidestepped the competition, who were developing their 500 twins into 600s, (sometimes even daring to go as far as 650cc) the 36bhp, 405lb Meteor was no fire-breathing speed freak.

Instead, it was a throwback to the prewar world of family motorcycling in which big twins (more usually with their cylinders arranged in a V) lumbered in leisurely fashion about the landscape.

Indeed, the Meteor was once wonderfully described by Bob Currie as “a rather woolly animal intended primarily for sidecar haulage.”