A 650 twin was eventually added to Ariel’s line-up, using most of a BSA engine to power it. They make for interesting rebuilds

A few weeks ago I had the good fortune to be invited along to one of the oldest established motorcycle clubs of our noble land, in Kings Norton Birmingham, where I had the honour to discover the most delightful bunch of biking guys you would ever wish to meet. Most of them were well over 140. But that’s another story. 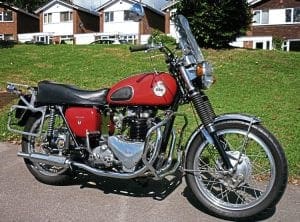 The main event of the night was a talk focused on one of the new breed of electric bikes (we all shuddered), the Zero, but we’ll leave that for now. There I met Doug Walker, a slight, gently spoken man who I was informed was their local expert on the Ariel – and I wasn’t to be disappointed.

My usual restoration pieces seem – I try my best – to follow a logical sequence. I knew this process was to go straight out of the window as soon as I visited Doug in his den and he started to unravel – yes that is the word – the story of his bikes.

He has two Huntmasters, one in original condition and one which he calls his ‘special’. Hopefully in a few months’ time we will take an in-depth look at the ‘original’, but that was not for today – the ‘original’ had lost its fuel tank – for now at least. So I focused my attention on the ‘special’ and I hope Ariel connoisseurs will be as intrigued by this bike as I was. And I have to say straight off the bat, Doug trained as a pattern maker in a galaxy far far away, and was reputed by his friends to be able to make anything.